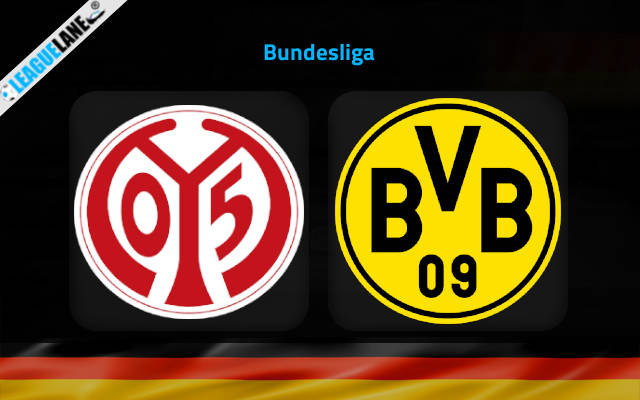 The World Cup break brought nothing new for Mainz 05 and their fans. Bo Svensson’s men extended their winless streak to five games in the league by playing a 1-1 draw at relegation-threatened Stuttgart on Saturday.

Mainz are only five points away from the red zone themselves after 16 rounds. They will hardly be able to stop the winless thread on Wednesday evening when might Borussia Dortmund come to MEWA ARENA for the Matchday No 17 fixture.

Marcus Ingvartsen scored Mainz’s lone goal on Saturday. He is now the team’s top scorer with five goals in ten appearances. Ingvartsen is also on penalties for Mainz and he is a decent option for the anytime goalscorer market.

That said, Mainz did have only two attempts on target in the mentioned stalemate at Mercedes-Benz-Arena.

They could get more chances to produce up front here against Borussia Dortmund who allowed three goals in the home win over Augsburg on Sunday.

The team led by Edin Terzic somehow found a way to prevail over Augsburg three days ago. It was an eventful contest with seven different goalscorers across the two teams.

Substitute Giovanni Reyna had the final word for Dortmund by netting a goal 12 minutes from time on the occasion.

Borussia Dortmund currently hold the sixth position in the Bundeslig table and they can ill afford a slip-up at MEWA ARENA. Considering how their back line performed at the weekend, we can certainly see the hosts on the scoresheet here as well.

Borussia Dortmund to win & Over 2.5 goals FT is paid at the 3.25 odds. We will also go for Dortmund’s 2-1 win as the correct score prediction at the attractive 9.50 odds.