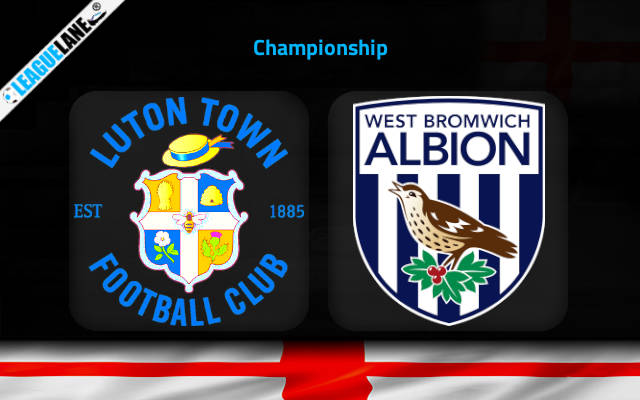 Luton vs West Brom Predictions and Free Tips from our expert tipsters when the teams go head-to-head in the England Championship on Saturday, 14 January 2023.

Luton will be having enough of spirits to enter their coming league fixture as they have succeeded in sealing victories consistently in the previous three outings. The team currently sits at 7th position, at the edge of the safe zone.

However, they won’t be having an easy test on Saturday as they faces an in-form West Brom as their visiting rivals. The guests are currently 9th in the standings. They have won four of the past five league outings and are just one point away from Luton at the moment.

West Brom won five of the last seven head to head clashes against Luton. The reverse fixture had finished in a goalless draw.

At this stadium, West Brom have a 100% unbeaten record for more than two decades barring a single fixture. Both teams to score often lands in the h2h matches between these two here.

Who will win the match between Luton vs West Brom?

Luton is on a 9-game unbeaten streak at home. But it deserves to mention that six of them were draws. On the other side, West Brom won three of the last two road trips.

On top of that West Brom have an upper hand in the h2h matches against Luton. Therefore, we expect a win for West Brom on Saturday.

Knwoing that their h2h matches have good amount of high-scoring recordings, we have enough of reasons to expect goals over 2.5 here.

The defensive side of both these sides have leaked a total of 26 goals so far in this season. On top of that their h2h tradition suggests a both teams scoring scenario. Therefore, we expect goals from both ends of Kenilworth Road on Saturday.

Despite of being the travelers, West Brom have managed to remain unbeaten in a very good share of h2h matches against Luton here. The current stats are also in favour of West Brom.