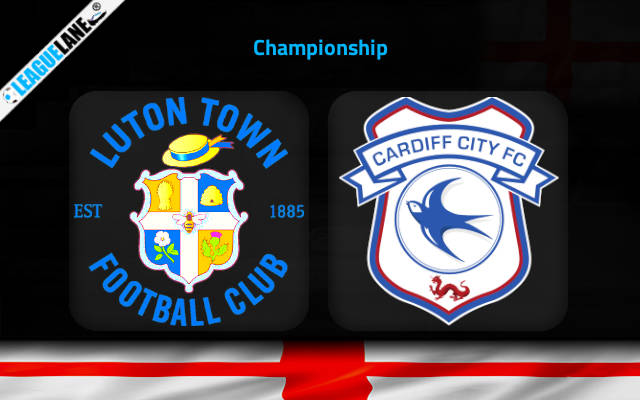 Cardiff City will travel to Kenilworth Road as they compete against Luton Town on matchday 20 of the Championship. Read our Preview, Predictions, and Betting Tips with Analysis here.

Luton in the early proceedings of the season looked like they might be challenging for a spot in the playoff as they went on a run of 10 games with just a loss among them. Things have returned to normal as the team are currently 12th in the table, a position where they finished last season.

After starting the season with a run of 4 games without a loss, the Bluebirds went on a shocking run of 10 games without a win losing 9 matches among them. With 2 wins in their last 3, the team has crawled outside the relegation zone and are now 20th in the table 3 points clear of the drop.

The hosts have lost just once in their last 7 home games in the Championship, while the away team has taken just 4 points in their last 6 games, with them holding Stoke to a draw away from home a team from whom the hosts were not able to take any points at home in their last home game. However, the hosts should get the lead at the end of either half.

Elijah Adebayo, who has scored 8 goals in 16 starts, has scored nearly a third of his team’s goals this season in the league. Expect the English forward to find the back of the net in this fixture.