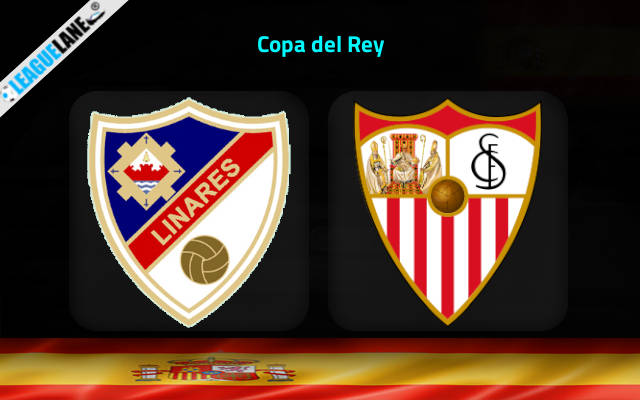 Linares vs Sevilla Predictions and Free Tips from our expert tipsters when the teams go head-to-head in the Spanish Copa Del Rey on Wednesday, 04 January 2022.

Linares won the last round of Copa Del Rey against Racing Santander with a 1-0 ft score. This clean sheet win over a team which plays a better division than Linares’ shows their potential of delivering a competitive display.

But things won’t be easy as they expects on Wednesday. They will be facing Sevilla for the pre-quarter. Although Sevilla are sitting at the foot of Laliga table, they will have a better chance of winning here.

They have met thrice in the past. A couple of Copa Del Rey match-day’s were played by these two in which Sevilla won both.

The latest meeting had finished in a 0-2 win for Sevilla. In fact, they have won all the three head to head meetings against Linares.

Who will win the match between Linares vs Sevilla?

Sevilla have won the past two rounds of Copa Del Rey and are currently having a six-fixture unbeaten streak across competitions.

On the other side Linares have won just once in the last seven outings. The above recordings are more than enough to back Sevilla.

Sevilla have scored a total of five goals in the previous two rounds of Copa Del Rey. On top of that they have netted in a total of 10 goals over the course of those three head to head meetings against Linares.

The goal numbers of Sevilla is more than enough to expect over 2.5 goals ft in this clash.

Sevilla have kept a clean sheet in the last two knockout fixtures of this tournament. They will have a similar test on Wednesday and we expect them to keep another clean sheet here.

Sevilla are priced at very low odds here. A win for them is an obvious thing and we also expect the same.