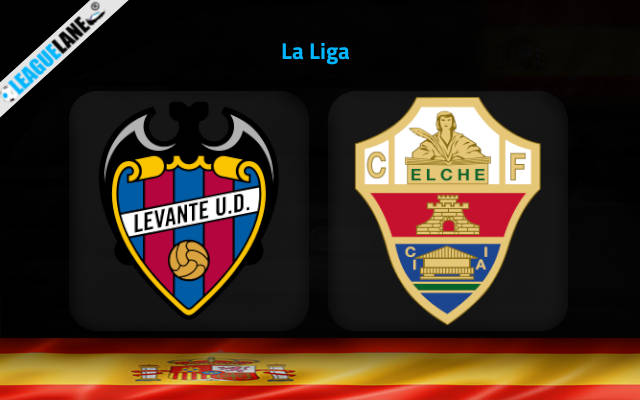 Elche is in the second half of the table winning three games out of the last five fixtures. Levante is in the nethermost position on the table where they have just secured a win after three consecutive league losses.

With least points among the group they are first in the line to get relegated as they lack 6 points with Alaves who are just above them. Round 26 of LaLiga marks Granotes to host the arrived Elche squad at Estadi Ciutat de València this Friday.

The Green-striped ones are at the 13th spot on the standing with 29 points from 25 games. They won 7 times in the league while drawing on 8 and losing on 10 other occasions. They scored 28 in total while conceding a sum of 34 so far in the league.

With the 2-1 home win against Rayo Vallecano, Elche have won their last 3 home matches in the league. They have been scored against in 5 of their last 6 games, letting opponents get 8 goals in all. Defensively, they have been far from perfect.

On the other hand, Levante resides at the rock bottom closing the 20th position on the table with a mere 14 points. Of the 24 matches played, they won only twice in the league while drawing 8 times and losing on 14 other occasions. Their total goals to conceding ratio stands at 24:50 which is the worst in LaLiga, showcasing their dreadful lineup.

With the 1-0 away win at Atletico Madrid, the visitors went back to winning ways after 3 winless matches in the league. A recurring aspect of more recent Levante games is the number of results with a nil in them.

The hosts have not registered a win against Elche CF in their previous 3 league games and have not won at home in their last 2 league fixtures. Therefore we predict a win for Elche as they are better on road than the home performance of hosts.