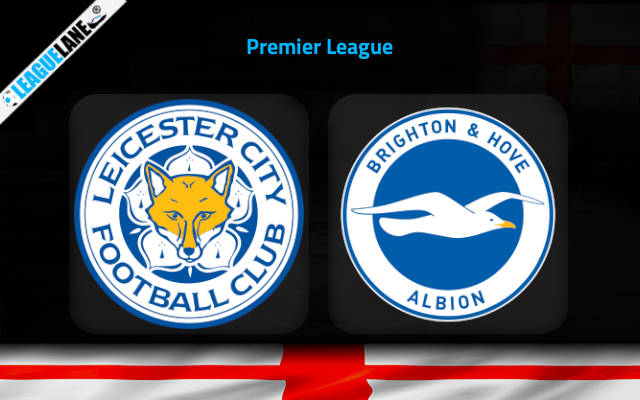 Leicester vs Brighton Predictions and Free Tips from our expert tipsters when the teams go head-to-head in English Premier League on Saturday, 21 January 2023.

Leicester appeared to have overcome their loss of form at the start of the season. But they are back to square one with an active four-game losing streak. They are once again under threat of dipping into the relegation zone.

Meanwhile, Brighton simply have been impressive the last several game weeks. They are placed seventh in the table at the moment, and that too with two games in hand. In fact, they need a surplus of just two points to climb into the top-five of the table.

Brighton recorded a massive 5-2 win in the reverse fixture in the first phase of the season. They are also unbeaten in the last two years, and scored twice or more in the past four games in a row.

Furthermore, goals have always come in plenty between these two teams. In fact, the last five h2h clashes in a row had goals from either end of the pitch.

Who will win the match between Leicester and Brighton?

Leicester have a 100% losing record after the World Cup break, barring their games in the domestic cups – against teams from lower divisions.

Meanwhile, Brighton are fresh off a 3-0 win against Liverpool, and before that they registered a 1-4 win against Everton. And before the World Cup break they had recorded wins against toppers Arsenal, and former champions Chelsea.

It goes without saying that Brighton are huge favorites this Saturday for the win.

The latest clash between the two ended in a 5-2 win for Brighton, and four of the past five meetings had three or more goals.

Going on, Leicester conceded two or more goals in four of their last six fixtures, while Brighton scored 12 goals from their last three road trips. Surely expect goals in huge numbers this weekend.

Brighton could muster just two clean sheets from their last 18 games, and the last they managed to keep one on the road was back in August. Moreover, only once have the Foxes failed to score at this ground in h2h meetings in the last 15 years.

As such, it is logical to expect goals to come from either end of the pitch.

Brighton are one of the best teams in the league at the moment, and they even have developed a niche of beating big teams. In the last two months alone, they managed to defeat Arsenal, Chelsea, Liverpool, Everton, and Wolves.

They are in great form, and will have no trouble against the struggling Leicester, who are on a four-fixture losing streak. Likely, Brighton to Win at an odd of 2.10 is the top-rated bet this weekend.

Moving on, the latest h2h encounter between the two was a seven-goal thriller, and clashes between the two always have had goals in huge numbers. On top of that, Brighton are scoring at an absolutely brilliant manner at the moment, while Leicester are struggling with their defense.

As such, chances are very high for goals to come in plenty. The Over 2.5 Match Goals bet at an odd of 1.90 looks very promising.