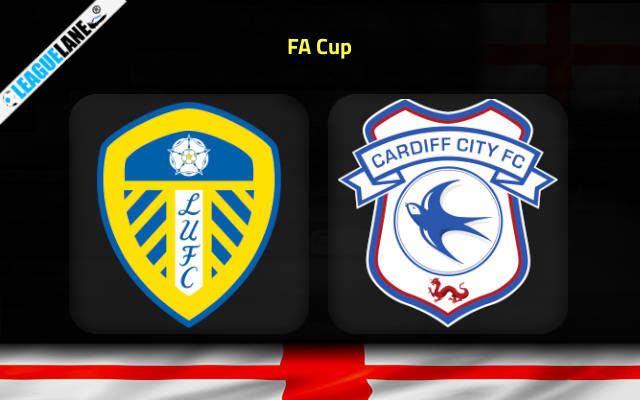 Leeds vs Cardiff Predictions and Free Tips from our expert tipsters when the teams go head-to-head in English FA Cup on Wednesday, 18 January 2023.

Leeds are part of the English top flight, and are going through a spell of rather poor performances after the World Cup. They need a confidence-boosting win at any cost at the moment, and will in all probability turn their attention towards this fixture.

Meanwhile, Cardiff are part of the second division, and are in danger of getting relegated even there. They are hanging by a thread over the relegation cut-off, and are on a long winless streak at the moment.

The two teams locked horns a week before in the FA Cup itself, and the game ended in a 2-2 draw at home for Cardiff. Which brings us to this replay. The Championship team will be on the road now.

Goals have come in plenty whenever these two teams have locked horns in the past. In fact, four of the past five encounters had four or more goals, and the last two meetings at this stadium had eleven goals combined.

Who will win the match between Leeds and Cardiff?

Leeds might not be flying high at the moment, but they have performed rather well at home throughout the season. In fact, of their total three losses here, two came against Arsenal, and Manchester City.

Meanwhile, Cardiff are on a winless run that stretches back more than two months, and they have just three wins in total on the road in all competitions in 2022-23. And importantly, they are in the second division, while their counterparts for the day ply their trade in the top flight.

It appears that Leeds have the edge this Wednesday at their home.

As mentioned before, goals have been a usual sight in h2h meetings over the years. And both these teams are not well-known for their defense. Chances are high for goals to come in huge numbers this game week.

Leeds conceded two or more goals in five of the last six overall fixtures, and they let in five goals from their past two appearances at home. They also have just two clean sheets at home since May, and their last clean sheet against this opponent came back in May.

Likely, it is expected that goals will come from either end of the pitch this Wednesday.

Leeds are at home, and will be determined to finish the job off in this replay – after the first game ended in a draw. They are also part of the top flight, and have delivered inspiring performances at home all through this season.

On the other hand, Cardiff are on the road, and importantly, they are part of the second division. They are in threat of being relegated, and might not be too enthusiastic about this replay. They have also been a mess on the road.

Coming to goals, the hosts have never been a team known for their defense. Seldom have they kept clean sheets this season, and even so at home. And the story has been the same in previous h2h clashes too.

Surely expect a high-scoring affair this Wednesday, and as such, the Over 2.5 Match Goals at an odd of 1.67 is the best second tip for the game.