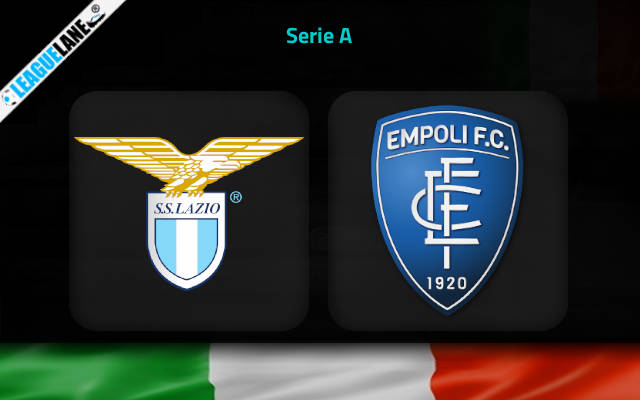 Lazio vs Empoli Predictions and Free Tips from our expert tipsters when the teams go head-to-head in Italian Serie A on Sunday, 8 January 2023.

Lazio are placed fifth in the table at the moment. But as a result of a tough schedule lately (which involved them taking on previous champions Juventus), they dropped some valuable points. Their immediate objective would be to secure their spot in the top-five.

Meanwhile, Empoli have been a mess right from the start of the season. Particularly on the road they have been finding it hard to deliver good results. In fact, they have a single win away from home, and it came against the inconsistent Bologna.

Lazio have a strong h2h record against this foe over the years. In fact, since 2015 they have a 100% winning record – barring a single draw. And they even managed to score three or more goals in the last two fixtures.

It is also to be noted that they have a 100% unbeaten record at this ground in the past three decades. To put their dominance into better context – barring three draws, they have a perfect winning record at this venue in h2h encounters.

Who will win the match between Lazio and Empoli?

This is a no-brainer. Lazio might have lost their last game. But they still are formidable side, and they are a wounded beast at the moment. They are at home, and they are taking on an opponent over whom they have a phenomenal h2h record.

Lazio scored three or more goals in the last two h2h clashes, and in the past three decades, they scored two or more goals at this venue in all but two games. Likely, expect goals in plenty this weekend from the determined hosts.

Chances are kind of low for this to happen. The hosts are dead-determined to not drop any more points – and as such they will be extra vigilant at the back.

Lazio are favorites to secure a dominant win this Sunday. Their h2h record alone is enough to determine who has the upper hand. Likely a -1.5 Asian Handicap on them at 2.60 odd seems like a superb pick.

And on the same note, expect goals in huge numbers too. The hosts will be eager to gain an early lead. Over 2.5 Match Goals placed at 1.83 odd seems like an excellent choice.