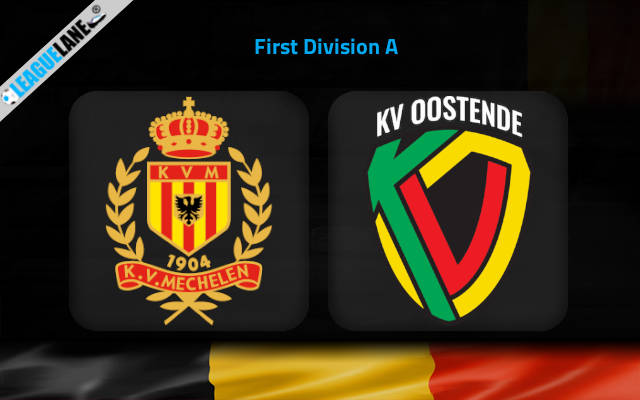 KV Mechelen vs Oostende Predictions and Free Tips from our expert tipsters when the teams go head-to-head in the Belgium Jupiler League on Saturday, 14 January 2023.

Neither KV Mechelen nor Oostende have a decent form in this season. Both these teams are positioned outside top half in the league standings.

In fact, Oostende sits inside the danger zone while Mechelen sits two points and two spots away from it. They both are on a winless run and will be hoping to seal a victory on Saturday.

Mechelen won three of the past five head to head meetings against Oostende. The reverse fixture ended in a 2-1 win for Oostende.

Past five meetings between these two teams had goals over 2.5 ft. At this venue, KV Mechelen won the past two encounters scoring a total of 8 goals.

Who will win the match between KV Mechelen vs Oostende?

KV Mechelen is currently on a four-game unbeaten streak at home. Meanwhile, Oostende follows an eight-game winless streak on the road.

Going on, KV Mechelen have a slight edge over Oostende in the head to head clashes too. Therefore, we expect a win for KV Mechelen on Saturday.

The head to head matches between these two teams have often been high-scoring matches. They have been recording matches with goals in plenty at this venue too.

Knowing that more than 60% of the matches played by these two teams had goals over 2.5, we have enough of reasons to expect this clash to be a high-scoring affair.

The defensive side of both these teams are so weak. They have been leaking goals in plenty and we expect them to leak here too. In that case, both teams to score at 1.62 odds is quite a good pick.

These two sides are having a weak run in this season. KV Mechelen looks comparatively better and they have a decent h2h form against Oostende.

Considering all these observations, we like to place KV Mechelen to win at 1.73 odds as the main betting option here. For the second tip, over 2.5 goals at 1.65 odds seems ideal enough as the h2h tradition of these two teams suggests a high-scoring display.