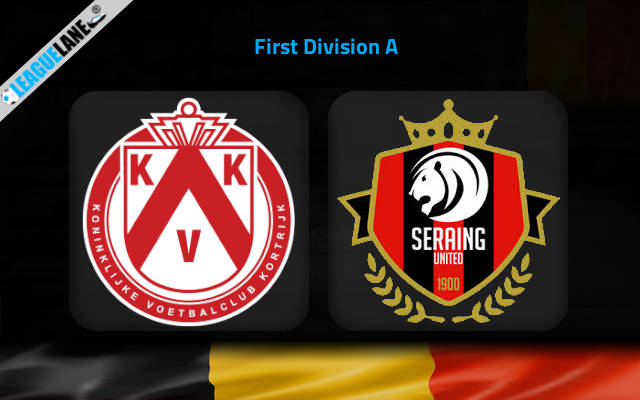 Kortrijk vs Seraing Predictions and Free Tips from our expert tipsters when the teams go head-to-head in Jupiler League on Wednesday, 18 January 2023.

Kortrijk have improved their form since December. They recently defeated Leuven by 3-2 however, they could not do much when they faced Gent last time. Now they will face their rivals Seraing.

Meanwhile, Seraing are at the bottom of the table. They held Standard to a 1-1 draw in their most recent outing. They still have a lot of work to do if they wish to leave the relegation zone.

The most important point to note is that Seraing are yet to win a single game against this team.

Both teams last met back in July and the host won that game by 1-0. They have won all four head-to-head matches starting in 2019.

Who will win the match between Kortrijk and Seraing?

The host are on a four-game winning streak against this team. Also, they have picked up two wins in their last five outings. Do note that Seraing are in the relegation zone and have lost three of their last five away games. Therefore, the chances are high that the host will win this match.

Three of the last four head-to-head meetings between these two teams ended with less than three goals combined. We can expect the same trend to continue for this game as well.

Both teams have scored in one of the last four head-to-head matches, which was back in 2019. However, it is likely that both teams will score in this match as the visitors have scored in all of their matches since the beginning of this month.

The host have won all of the head-to-head matches against Seraing since 2019. They have won three of their last five outings in all competitions. Therefore, the first tip is that Kortrijk will win this game– at 1.85 odd.

Our second tip is that Both teams to score – the odd for this tip will be at 1.70. Despite being at the bottom of the table, the visitors have scored three goals in their last two league matches.