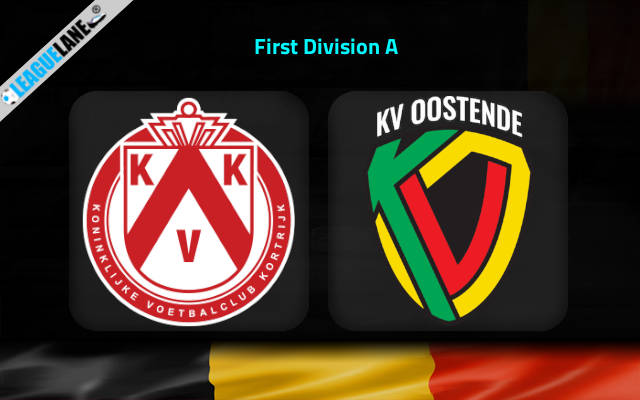 Kortrijk vs Oostende Predictions and Free Tips from our expert tipsters when the teams go head-to-head in Jupiler League on Saturday, 28 January 2023.

The relegation battle is slowly picking up pace as Kortrijk are struggling to find consistency. They lost to Mechelen in their last league outing by 3-2. Now they will face their rivals Oostende for their final January fixture.

At the same time, Oostende’s season is virtually over, they are in the relegation zone and have the worst form in the league. In the league, they lost to Cercle Brugge last time by 2-1.

The previous head-to-head records show that Kortrijk have won three of the last four head-to-head encounters against this team. Back in November, Oostende won this fixture by 3-1.

Another important point to note is that the host are on a three-game winning streak at home against this team. The last encounter was in the quarterfinals of the Belgian Cup.

Who will win the match between Kortrijk and Oostende?

This is a tough match for Oostende as they have one an abysmal away from this season. As far as Kortrijk are concerned they picked up three wins in their last five outings. On top of that, they have won the last three consecutive head-to-head matches at this ground. Considering all of this, we can expect the host to win this game.

With just one exception, the last three head-to-head matches ended with not more than two goals being scored combined. Both teams will play defensively and will look to avoid losing any further points.

Both teams are in decent goal-scoring form this month. In the previous meeting, the game ended in a 3-1 scoreline.

Kortrijk have won the last three encounters against his team. Moreover, Oostende have lost nearly 70% of their league fixtures this season. Therefore, you can back the following as our first tip is that Kortrijk will win this game– the odd for this tip will be at 2.00 odd.

A good second tip for this game is that Under 2.5 goals will be scored – the odd for this tip will be at 2.20. This is after considering that, the last two matches at this ground ended with not more than two goals being scored.