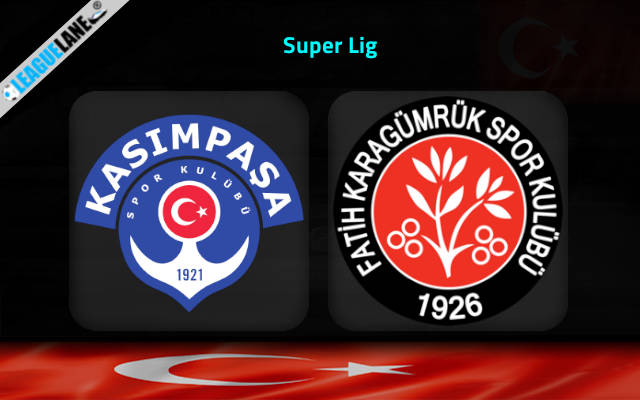 Kasimpasa vs Fatih Karagumruk Predictions and Free Tips from our expert tipsters when the teams go head-to-head in Super Lig on Sunday, 15 January 2023.

Kasimpasa could not repeat their 4-1 triumph when they faced Besiktas last time. Now they will re-group and prepare for an important game as they will play against Fatih Karagumruk.

At the same time, Karagumruk have picked up good form recently. Now they are tenth in the league and are on a three-game unbeaten streak. In their last league outing, they held Konyaspor to a 3-3 draw.

Karagumruk are on a two-game winning streak against this team. Both teams last clashed back in April and the visitors won that game by 3-2.

Another interesting fact is that it has been nearly two years since the last time the host won this fixture at Recep Tayyip Erdoğan Stadyumu.

Who will win the match between Kasimpasa and Fatih Karagumruk?

Karagumruk will most likely win this fixture. The two main reasons are that they are on a three-game unbeaten streak in the league. Do note that they recently defeated a top team like Kayserispor as well.

On top of that their opponents have lost four of their last five outings in all competitions.

At this ground, this fixture is a high-scoring one. The last two encounters ended with a minimum of three goals being scored.

The chances are high that both teams will score in this fixture. Both teams have scored in all head-to-head matches starting from 2013.

The visitors are tenth in the league and have performed well against Kasimpasa in the past. Do note that they won they April fixture of 2022 by a 3-2 score line . Therefore, the first tip is that Fatih Karagumruk will win this game– the odd for this tip will be at 3.00 odd.