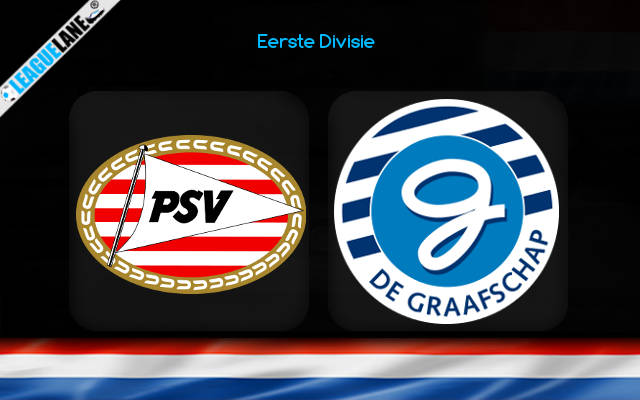 Jong PSV and De Graafschap face each other at Eindhoven on Monday. De Graafschap has played well this season, earning their place as 5th in the league table. They need to continue their performance in this season if they want a chance in the play-offs.

Jong PSV is 11th in the table at the moment. They are 8-points behind their opposition in the next match. Their last game was against Maastricht, in which PSV won with 1-2 FT score. PSV needs more wins in the upcoming matches if they wish to be in the play-offs.

De Graafschap has gained 30 points from 17 matches in the tournament. Their last match against Jong Ajax ended in a loss for the team after Ajax scored three goals, but Graafschap could score only one.

Jong PSV has not been in a good form in this season. They have 6 wins, 3 draws and 5 losses in their name currently in Eerste Divisie. Even though the team has scored goals in 11 of their matches out of 12, goals they conceded are more than the number of goals they have scored.

However, they have won in 4 of their last 8 home matches and have only failed to score in 3 of these matches.

De Graafschap has gained their 30 points from 9 wins, 3 draws and 5 losses and Graafschap has failed to score in only 3 of their matches in the season. They have scored 28 goals and have conceded 20 goals this season.

Anyway, the team has performed well in their away matches. They have won 6 of their 8 away matches this season and has scored 2 or more goals in these matches.

The match will be a tight one but De Graafschap has more chance in winning the match.