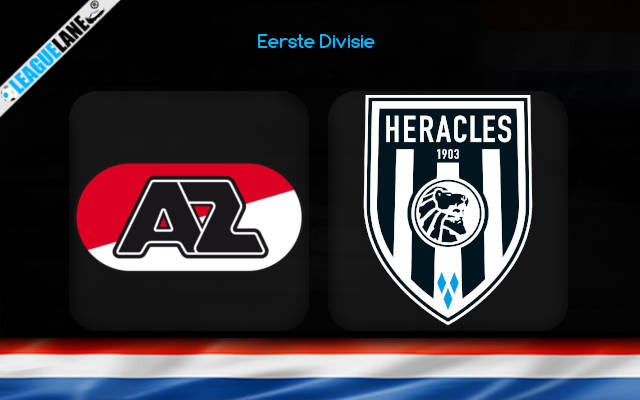 Jong AZ Alkmaar vs Heracles Predictions and Free Tips from our expert tipsters when the teams go head-to-head in Eerste Divisie on Friday, 6 January 2023.

League leaders Heracles will aim for their fifteenth win of the season as they will play against Jong AZ. They have a good lead at the top of the table and are on a six-game winning streak.

Yusuf Barasi scored a brace last time however, it was not enough for Jong AZ to take all three points when they played against Jong PSV. it is worth knowing that at home, they have picked up only one point since late November.

Both teams will be playing for the first time ever. The visitors are unbeaten since November and have a five-point lead against their nearest rivals PEC Zwolle. The host are winless in three of their last four home matches.

Who will win the match between Jong AZ Alkmaar and Heracles?

Jong AZ will have a difficult game against the visitors. Another interesting fact is that both teams are separated by nineteen points on the table. We can back the visitors to win this fixture.

The visitors are in excellent goal-scoring form. They defeated Dordrecht by a huge 8-1 margin last month. Since early November they have scored at least three goals in their last three league victories.

It is likely that both teams will score. This is after considering that the host have scored in every game at home since November.

The first tip is that Heracles will score over 2.5 goals – the odd for this tip will be at 3.00 odd. They are in excellent goal-scoring form. They demolished Dordrecht last time by scoring eight goals. Moreover, they have scored at least three goals in their last four victories.

Our second tip is that Heracles will win both halves – at 2.87. We can back this tip as the visitors won both halves of the game when they defeated Dordrecht last time. The same trend was observed when they won against Roda as well.