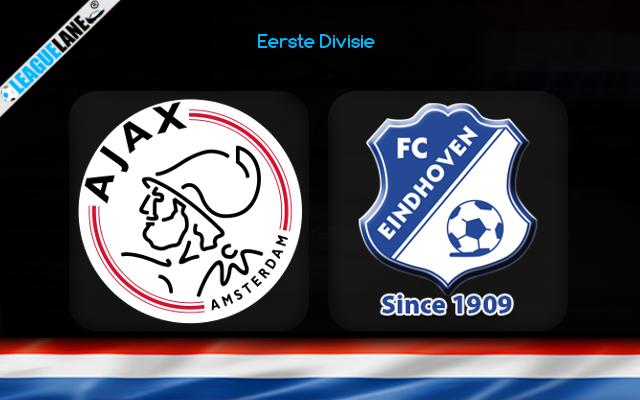 Jong Ajax vs FC Eindhoven Predictions and Free Tips from our expert tipsters when the teams go head-to-head in the Dutch Eerste Divisie on Friday, 6 January 2022.

Jong Ajax are not pulling up any trees of late. They are on a four-fixture winless streak and will be hoping to seal a win on Saturday.

FC Eindhoven will be their rivals for Saturday’s Eerste Divisie fixture. Eindhoven are currently sitting inside the safe zone and will be targeting one of those advancement spots in the standings.

Three of the last six meetings between these two team had finished in a draw. The latest meeting ended in a highly competitive 2-2 draw.

At this venue, the last two encounters were stalemates. Jong Ajax had netted in a total of 9 goals over the course of the last three encounters here.

Who will win the match between Jong Ajax vs FC Eindhoven?

Although Jong Ajax failed to seal a win in the last four consecutive league matches, three of those were score draws.

On the other side, FC Eindhoven lost three of the last five road trips. Their head to head tradition have seen them often recording a draw.

By the looks of things, we are quite not sure about the winner here and a draw option seem to be ideal under the current circumstances of both.

These two teams have been recording games with over 2.5 goals ft lately. Their recent h2h matches at this stadium have also been high-scoring affairs. In that case, we expect this match to have over 2.5 goals ft.

Taking into account these observations, we don’t like to back a winner here. Instead we like to place the draw option at 3.40 odds for the first tip here.

For the second tip, both teams to score at 1.55 odds seem to be ideal considering the weak defenses of both.