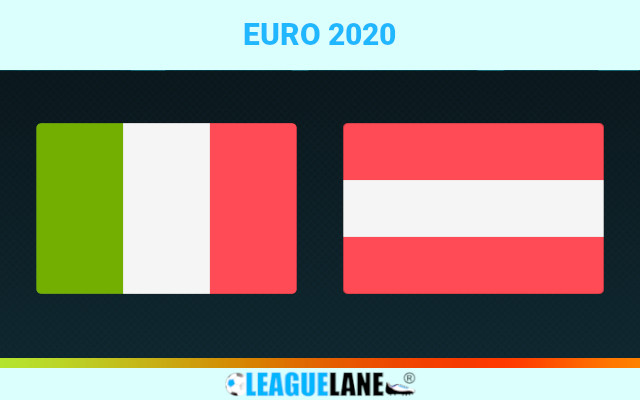 Italy take on Austria in the second round of 16 fixture of the Euro 2020 as heavy favourites.

Without a doubt, Italy is the only team that consistently performed with the highest level in the group phase, a 100%-win rate with 7 goals scored to none conceded is a rarity at this competition.

Against Turkey and Switzerland, they were lethal in the 3-0 wins, while a completely different starting eleven managed to edge past Wales with a solitary goal in a game that saw several squandered chances.

The performance against Wales highlights two points, goals could dry out without Insigne, Berardi and Immobile upfront, while Mancini has plenty of like-to-like players in defense and midfield.

Austria on the other hand went into matchday 3 needing a win to qualify as runners up of the group and did a professional job to bag a 1-0 win against Ukraine.
This helped them to stay clear off Ukraine with a 3-point lead having defeated North Macedonia 3-1 in the first group game. Against Netherlands, they suffered a 2-0 defeat, exploiting inconsistencies and lack of a proper number 10 in midfield.

This is the first time Austria qualified for the knockouts at Euro, having finished the group phase without a win in 2008 and 2016.

Both Giorgio Chiellini and Alessandro Florenzi are major doubts for Italy’s Euro 2020 round of 16 clash against Austria, though they will be closely assessed close to kick-off.

Lorenzo Pellegrini is the only player certain to miss this contest with an injury.

Marco Verratti’s return to the squad and a solid performance against Wales means one of Manuel Locatelli and Nicolo Barella must sit out, a harsh decision with both players being instrumental in their teams first two victories.

Franco Foda is sweating on the fitness of Christoph Baumgartner and Konrad Laimer. Both players were substituted after serious knocks during the win against Ukraine.

It is interesting to see if Foda stick to the back 4 pushing David Alaba to wins, though he is also an option in the midfield.

Italy is unbeaten in the 7 head-to-head games against Austria since 1934 with 5 wins and 2 draws.

First of these meetings happened in the semifinal of World Cup 1934, the Azzurri edging a 1-0 win.

Though, their last meeting was a friendly dating back to 2008 which saw a 2-2 scoreline.

The most common scoreline we saw between the sides is 1-0 which occurred 3 times while 2-1 was seen on 2 occasions.

Roberto Mancini’s men are unbeaten in 30 games, and they are getting better and better with their last 11 wins happened without conceding a goal.

Meantime, Austria struggled against high profile teams, this was evident in the group game against Netherland we have no doubt that this will be a comfortable outing for the Italians.

While Italy to win is paid at 1.58 odd, our top recommendation is to back Saturday’s home team to win on a -1.5 Asian Handicap for 2.50 odd, meantime win to nil is an equally good options priced at the 2.25 odd.

The 1-0 win against Wales on Sunday is the first time Italy failed to score less than 2 goals in their last 11 games and they can be backed to score over 1.5 team goals at 1.80 odd.

Ciro Immobile has netted in 5 consecutive starts for his national team and he is once against my recommendation to score anytime here.