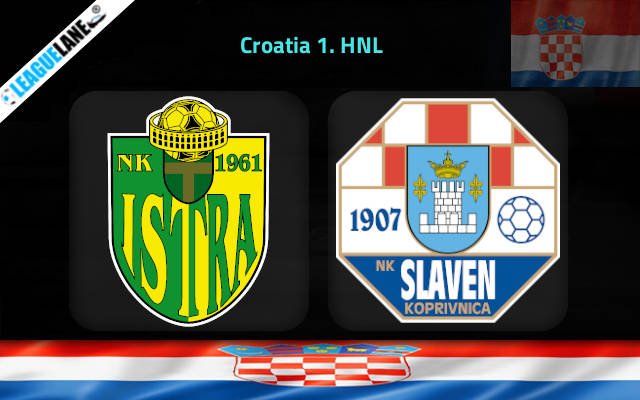 Istra 1961 host Slaven Belupo in the first game of the Matchday No 18 in Croatian HNL on Friday afternoon at Stadion Aldo Drosina.

The teams are separated by six points in the middle of the league standings. Istra were on a three-game unbeaten streak before falling 2-0 at Lokomotiva Zagreb in the previous round in mid-November.

They are led by Spanish manager Gonzalo Garcia. He can be worried about his team’s recent attacking showings since Istra 1961 have bagged only two goals in the previous five HNL affairs.

On another note, the hosts have also kept three clean sheets in the last four league outings. Also, none of the previous six matches they played in the league provided three or more goals.

Slaven Belupo will travel to the west of the county on the back of five subsequent league affairs without a loss.

They have climbed to the fourth position in the league table as a consequence. Nevertheless, each of the last three games they played ended in draws, including the famous 2-2 stalemate against heavyweights Hajduk Split in the last pre World Cup outing.

Head coach Zoran Zekic was not satisfied with his team’s defensive performances in the recent mid-season exhibitions because Slaven Belupo conceded six goals in the defeats to Hungarian side Zalaegerszegi and domestic rivals Lokomotiva Zagreb last month.

Istra 1961 won only two of seven home outings in this term of HNL, scoring no more than five goals in the process. Slaven Belupo are unbeaten in the previous five league games but they also own a terrible record in the previous matches in Pula.

This is why we expect a tight affair without too many goal-scoring chances at either end. The first bet is Under 1.5 goals at the 3.00 odds, while we will also try with the 0-0 correct score pick at the attractive 8.00 odds.