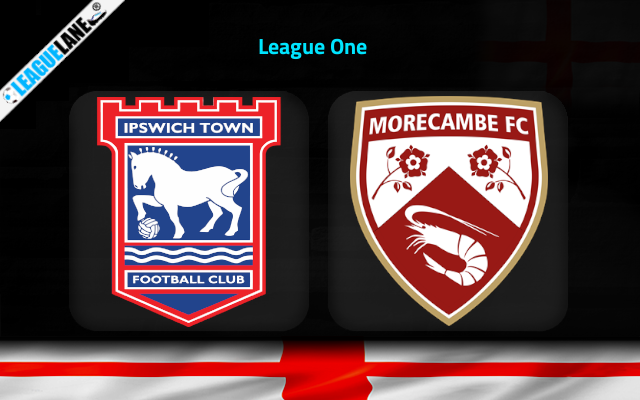 Ipswich vs Morecambe Predictions and Free Tips from our expert tipsters when the teams go head-to-head in the England League One on Tuesday, 24 January 2023.

Ipswich were on a four-game unbeaten streak in the league before losing 2-1 to Oxford in their previous outing. However, they are still sitting in the third position in the standings.

Meanwhile, Morecambe have managed to record a win in the past three consecutive matches. As a result, they have climbed into the 21st position from the bottom of the table.

They have locked horns just five times and Ipswich was unbeaten in all. The reverse fixture ended in a 1-2 win for Ipswich.

At this venue, Ipswich won and drew one apiece of their total two h2h clashes against Morecambe. Both fixtures had goals in plenty.

Who will win the match between Ipswich vs Morecambe?

Ipswich have a big plus here apart from their h2h upper hand. They are on a six-game unbeaten streak at home. In fact, they have lost just once at home so far in this season.

On the other side, Morecambe is having a dreadful form on the road. They are on a seven-game winless streak at the moment. In that case, we expect a win for Ipswich on Wednesday.

The attacking side of Ipswich is very impressive at home. They have scored a total of 10 goals in the last four home outings across competitions.

Against a team like Morecambe, Ipswich could easily score a couple or more and we expect this match to have over 2.5 goals.

Ipswich have allowed at least one goal in four of the past five home matches. Since Morecambe is having a strong form in the league for the past three outings, we expect this match to have goals from both ends.

Ipswich is currently seven points away from the second spot. Meanwhile, Morecambe is just one point away from a non-relegation spot. They both will enter this match with the determination of securing their spots.

Going on, we are in favor of Ipswich and expect them to seal a 2-1 win in this highly competitive affair. Over 2.5 goals ft is our second betting pick here.