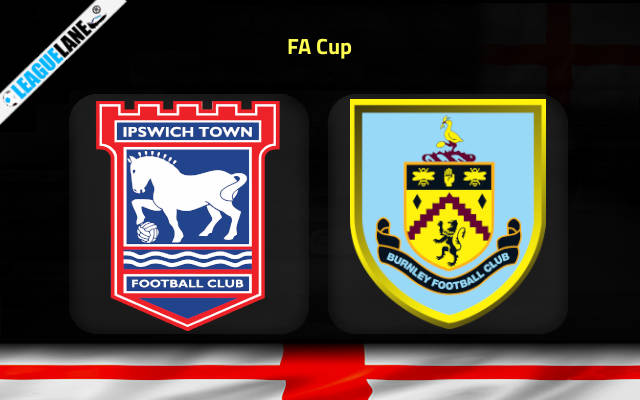 Ipswich vs Burnley Predictions and Free Tips from our expert tipsters when the teams go head-to-head in English FA Cup on Saturday, 28 January 2023.

Burnley are surely leaving their mark in the Championship this season. They are at the top of the table with a five-point lead, and are on a long winning streak. Fans are already planning about their campaign next season in the top flight.

Meanwhile, Ipswich are part of the third division. They are trying their best to secure a top-two finish, in order to secure direct promotion to the Championship. However, their form has been slightly poor lately.

Burnley won three of the past five encounters between the two teams, and lost just once in the last eleven years against this opponent. However, do note that the guests were able to register just two clean sheets at this ground in the past two decades.

Who will win the match between Ipswich and Burnley?

Burnley are currently the toppers of the Championship, and are the prime contenders to make it to the Premier League next season. They are on a six-game winning streak, and they also won 12 of their past 16 fixtures.

Meanwhile, Ipswich have just two wins to their name from the past six fixtures, and most importantly they have a poor h2h record against this rival over the years.

Likely, count on a Burnley win this weekend.

Both these teams are the best offenses in their respective leagues. Burnley scored two or more goals in 11 of their past 14 games, and did the same in five of their past seven road trips.

As these two lock horns, chances are quite high that goals will come in plenty.

For all their heroics, Burnley failed to keep clean sheets in 10 of their past 13 road trips, and in three of their former four fixtures. On the other hand, Ipswich scored three or more goals in three of their preceding four appearances at home.

Going on, Burnley managed to keep just two clean sheets at this stadium in h2h encounters over the past two decades.

It surely seems that a clean sheet might be asking too much from either squad this weekend.

Burnley are easily the best team in the Championship at the moment. In spite of intense competition, they are at the top of the table with a five-point lead, and also won 12 of their past 16 fixtures.

On top of that they a dominant h2h record against this opponent over the past two decades as well.

On the other hand, Ipswich are slightly struggling to find form at the moment, and importantly they play a whole league below their counterparts for the day. Moreover, they were winless in four of their previous six games as well.

As such, Burnley seem to be the favorites for the weekend, and a win for them is placed at 2.25 odd.

Going on, both these teams scored the most number of goals in their respective leagues. And the two squads showed this same goal-scoring prowess in previous h2h clashes too.

In fact, Ipswich scored three or more goals in three of their last four home appearances, while Burnley scored twice or more in 11 of their past 14 match-ups.

Likely, the Both Teams to Score wager looks quite promising at an odd of 1.83.