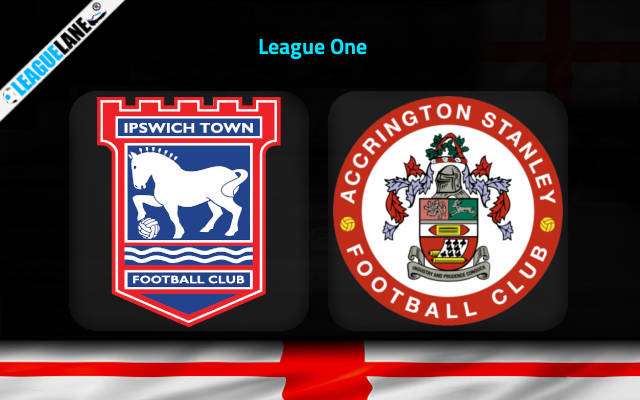 In game week 29 of League One, Ipswich Town faces Accrington Stanley for their next match on Saturday at Ipswich.

Ipswich is in the 11th position on the league table with 35 points from 26 matches. They played their last match against Bolton Wanderers. The match ended in a loss with opposition scoring two goals, while Ipswich was goalless.

With the loss in the last match, an unbeaten streak of four games was stopped. From the last ten matches, the team has also failed to score in five matches. However, the team has played well in their home ground. They are unbeaten in the last three matches and have only lost in two matches from 13 home matches.

Accrington stays in the 10th position on the league table with 36 points from 26 matches. Their last match was against Sunderland, which ended in a draw. The match ended with 1-1 Ft score.

After their last match ended in a draw, the team’s unbeaten streak has gone up to five games. They have scored in seven of their last ten matches as well. The team has a poor record in their away matches. They only have three wins from their away matches in this season.

Both teams play for a win in the match because the winner will have an upper hand over the opposition. They are only 1-point away from each other. Ipswich has an advantage over their opposition because they are playing in their home ground where they have 3-game unbeaten streak. They will look to keep this streak going on.

The 10th and 11th placed team will have a tough match coming. Accrington has played slightly better than Ipswich in their most recent matches. So, I believe the match is more likely to end in a draw or a win for Ipswich.