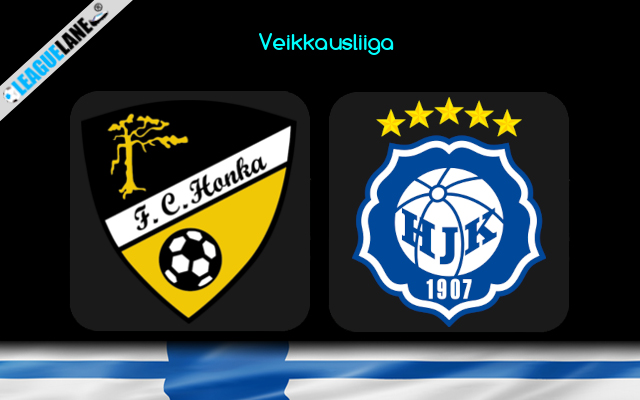 HJK arrive at Tapiolan Urheilupuisto on Thursday for the Veikkausliiga game with hosts Honka.

The recent form is underwhelming for the host. They have been winless in their last 3 league outings. This downfall have created a hurdle for them in decreasing their gap between their top spot rivals HJK.

In the last league game, Honka lost by a 1-2 margin to HJK at home. It needs to be mentioned that the host could not take advantage of the home turf.

They have been conceding goals in plenty of late, and most importantly they have a poor head to head record against this opponent over the years.

Meanwhile, HJK have been gunning for the top most spot ever since the start of the campaign and as of now they are placed their with a difference of 5 points with the second spot KuPS.

Going on, both the offense and defense has been an area where they really excelled throughout this tournament. The harmony between the two will force them to lean on this particular attribute.

HJK are on a 2-fixture winning streak.

They had scored 2 or more goals in 3 of the past 5 meetings.

At this venue, the hosts were unbeaten in 7 of the past 8 clashes against Honka.

The latest encounter at this stadium had finished in a 1-2 win for HJK.

HJK were unbeaten in 8 of the past 10 overall fixtures and in the process thay had gone on multiple winning streaks. Do also note that they had remained invincible in 5 of the past 6 road trips.

On the other hand, Honka were winless in 4 of the past 6 overall fixtures and they had let in 6 goals in the previous 3 league fixtures. Do also note that they are on a 2-fixture winless streak in front of their home crowd.

Considering these observations as well as the head to head recordings, we expect a win for HJK on Thursday.