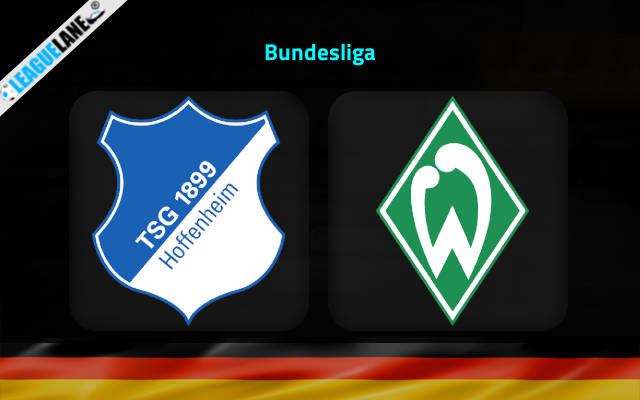 Hoffenheim have been a major presence in the top tier of the German top flight for the past few years, while their counterparts for the day, Werder Bremen, secured promotion from the second division only at the end of the previous season.

Currently Hoffenheim are placed fifth in the table, and they are trailing by just three points below the toppers. They also lost just once in the past five match-days in the league, and this sole loss came against Borussia Dortmund.

Going on, they missed out on a European ticket by just six points the previous season, and they are determined to make amends this time around.

They have been performing quite well at home for some time now. They are finding the back of the net in plenty, and also built a huge momentum as a result.

In addition to them being at home, they have the confidence of taking on a newly-promoted opponent from the second division, and on top of that they have a great h2h record against this rival over the years.

Likely, expect a win for the hosts Hoffenheim.

Still, Bremen did secure promotion after a long and hard campaign the last season. They definitely are high on confidence, and also are consistently finding the back of the net at the moment. Count on them to slot in at least one goal this Friday.

Hoffenheim were unbeaten in 12 of their previous 14 overall fixtures, and in the process they went on two separate three-game winning streaks, and another two-match winning run.

And importantly, they also won six of their past seven appearances at home.

On the other hand, Werder Bremen were winless in five of their past eight overall fixtures, and all along they conceded goals in plenty. Furthermore, they have a poor h2h record against this rival over the years.

For the reasons, expect Hoffenheim to deliver a winning performance this Friday, against the newly-promoted Bremen.

However, Bremen are scoring consistently, and count on them to find the back of the net at least once.

Tips for Hoffenheim vs Werder Bremen