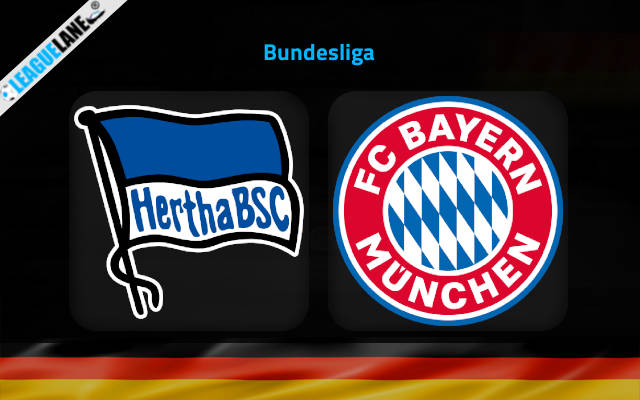 Bayern Munich will hope to replicate their 4-1 win against Hertha Berlin as both teams will go head-to-head for the second time this year at Olympiastadion. The visitors are slowly making their way back to the top of the table.

Two defeats in their last three games have put Hertha’s season at risk. Now they are just two points above the relegation zone. Most recently, they lost to Werder by 1-0. It was Niclas Füllkrug who scored the winning goal just five minutes from the full-time whistle.

The visitors suffered a slight dip in form at the beginning of this season. Now they are in excellent form. They are just one win away from reaching the top of the table. They demolished Mainz most recently in a 6-2 thriller.

It is interesting to note that six different players found the back of the net in that game. They are the only team in Bundesliga to have won their last three consecutive outings.

Even in the Champions League they have not lost any game despite a slow start in the Bundesliga. They have scored thirteen goals in their last three outings.

Looking at the form, the host have only won once in their last nine home matches.

The host have struggled against top teams this season. Their two victories this season came against Augsburg and Schalke.

If the visitors manage to win this fixture it will make a huge difference in their table ranking. Despite an initial slow start to the campaign, they still remain amongst the heavy favourites for the title this season.

You can back the following as out first tip is that Bayern Munich will score Over 3.5 goals – the odd for this tip will be at 2.75. So far, the visitors have scored at least four goals in two of their last three matches at Olympiastadion.

Our next tip for this game is that Bayern Munich will keep a clean sheet – the odd for this tip will be at 2.50. The visitors have kept a clean sheet in two of their last three overall head-to-head meetings.

You can also bet on Jamal Musiala to score in the first half – at 7.50. He is on a two-game goal-scoring streak. Against Mainz and Hoffenheim he scored before the half-hour mark respectively.