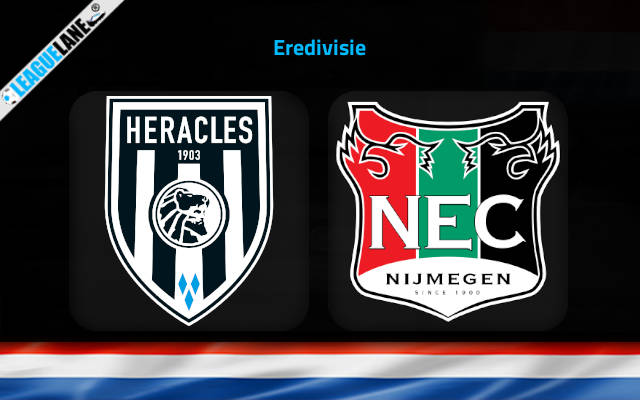 The hosts welcome NEC at Polman Stadion in what is expected to be an encounter that will see both sides have an objective that is worth of claiming 3 points on the board which should see us getting a good game from both these teams.

After 2 game weeks, Heracles sit in 13th position in the table after claiming just 1 point from the 6 points available. As a result, they have lost their opening fixture 2-0 against PSV at home and drawn their 2nd game of the season 1-1 against Sparta on the road.

In the 1-1 draw against Sparta, Delano Burgzorg scored an equalizing goal for Heracles in the 77th minute of the game which was important in the context of their position in the table. In that fixture, there were 12 shots on goal from Heraclieden compared to Sparta’s 11 but both teams managed to get 4 shots on target.

On the other hand, the away side currently sit in 11th place in the table after collecting 3 points from the 6 that were available.

Consequently, they have lost their opening fixture in a 5-0 hammering against Ajax away from home, but they have managed to secure a 2-0 victory over PEC Zwolle at home which is a result that will do them a world of good.

In their victory over Sparta, Ali Akman and Jonathan Okita got on the score sheet in the first half itself by scoring in the 4th and 42nd minute respectively to seal all 3 points.

Those points were needed especially after their loss against Ajax. The statistics for the game against Sparta gave a different story to what the score line suggests.

PEC Zwolle had 17 shots at goal, but they managed to find only 1 on target, whereas the Eniesee had 8 shots on goal from which they had 3 on target. This goes to show that NEC are not so reliable when their team is supposed to defend, which creates multiple opportunities for the opponents to score.

This fixture provides good value in betting terms. With NEC finding their form last week in a 2-0 win over PEC Zwolle, we give the benefit to the away side to Double chance in this game at 2.00 odds.

Consequently, we see that Heracles are going to put in a strong defensive performance considering that they cannot afford to lose points and slumber down the table, as a result, we see that there will be goals under 2.5 in this fixture at 2.05 odds.