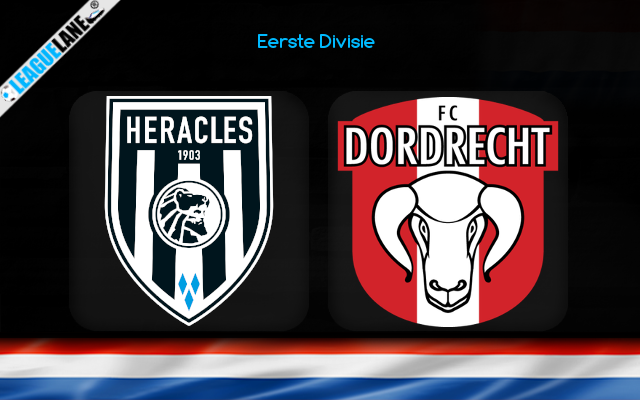 Heracles vs FC Dordrecht Predictions and Free Tips from our expert tipsters when the teams go head-to-head in the Dutch Eerste Divisie on Friday, 16 December 2022.

Heracles will be having highest of spirits to enter this Eerste Divisie fixture. They are on a four-fixture winning streak in the league and have climbed into the top spot of the league standings.

For the Friday’s Eerste Divisie meeting, Heracles will be playing host to FC Dordrecht, who is currently at 15th place in the league standings. Dordrecht is having an inconsistent form which might affect their spirits while facing the current first place.

Heracles can also rely on the recent tradition since they won the previous two meetings against FC Dordrecht. The latest encounter had finished in a 3-0 win for Heracles.

Heracles are having a 100% unbeaten record at home against FC Dordrecht in the past two decades. They had netted in a total of 12 goals in the last six home meetings against Dordrecht.

Who will win the match between Heracles vs FC Dordrecht?

Heracles is having an exceptional form this season. They are yet to make mistakes at home and have a 100% winning record barring a 2-2 draw against MVV Maastricht.

FC Dordrecht is not having a strong form which displays the potential of beating Heracles who have been delivering stellar performances. Therefore, expect a victory for Heracles on Friday.

Heracles have the best attacking side of this campaign. They have been scoring goals at a rate of over 2.5 per game.

In fact, almost 100% percentage of matches played by Heracles were high-scoring affairs. Therefore, expect this match to have over 2.5 goals full-time.

FC Dordrecht have scored goals in all their away fixtures this season. On the other side, Heracles have leaked goals in three of the last six home matches in an alternative fashion. Considering the trend, we expect goals from both ends of Erve Asito on Friday.

Bookmakers see the hosts as pretty big favorites to win this game. We also like to place Heracles to win at 1.55 odds as the main bet.

For the second tip, we like to place the over 3.5 goals ft bet at 2.00 odds considering the goal-scoring side of Heracles.