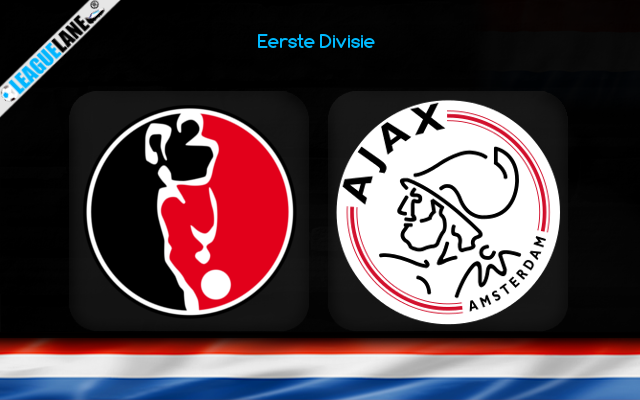 Helmond vs Jong Ajax Predictions and Free Tips from our expert tipsters when the teams go head-to-head in the Dutch Eerste Divisie on Friday, 27 January 2023.

Helmond have managed to make a thread of three unbeaten games, but are still lagging behind in the table. They sit third from the bottom in the standings.

Jong Ajax are not pulling up any trees of late. They are on a seven-fixture winless streak and will be hoping to seal a win on Friday.

Helmond can also rely on the recent tradition since they won the previous two encounters against Jong Ajax. The reverse fixture ended in a 0-1 win for Helmond.

At this venue, Helmond is on a two-game unbeaten streak against Jong Ajax. 80% of the h2h matches they played at this stadium saw the landing of over 2.5 goals option.

Who will win the match between Helmond vs Jong Ajax?

Helmond have managed to record a set of unbeaten outcomes at home lately. They were unbeaten in three of the past four home fixtures.

Meanwhile, Jong Ajax is on a three-game winless streak on the road. The recent slump affected their smooth run on the road too.

Moreover, Helmond Sport have an upper hand in the recent history of this match-up. Thus, we expect a win for Helmond on Friday.

Unlike the reverse fixture, this match is likely to have goals in plenty. The main reason is the defensive line of both the teams at present. Four of the past five road trips of Jong Ajax and four of the last six home matches of Helmond had goals in plenty.

The current form of both the teams doesn’t seem that impressive. Helmond have the advantage as they have an edge in the recent tradition and an unbeaten form in the league at present.

We therefore like to back Helmond to win at 2.50 odds as the main betting tip. For the second tip, we like to back the over 2.5 goals option at 1.57 odds.