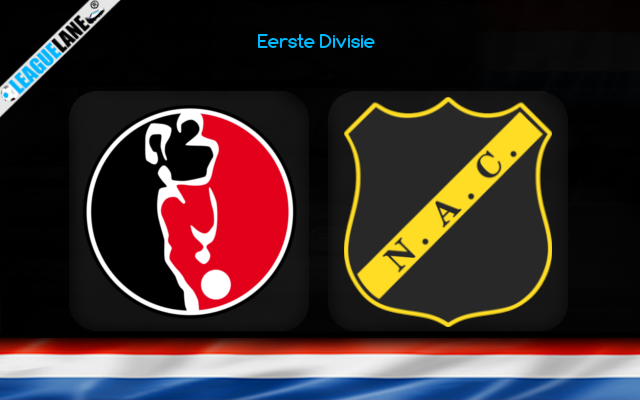 Helmond Sport vs NAC Breda Predictions and Free Tips from our expert tipsters when the teams go head-to-head in the Netherlands Eerste Divisie on Friday, 13 January 2023.

Helmond Sport have managed to make a thread of two unbeaten games, but are still lagging behind in the table. They sit third from the bottom of the standings.

Meanwhile, NAC Breda have managed to seal a couple of victories in the past three league outings. They are just a point away from the safe zone at the moment.

Breda won four of the past five h2h meetings against Helmond Sport. The reverse fixture had finished in a 1-0 win for Breda.

At this venue, they both have won, drew and lost two apiece. Their h2h recordings at this venue have mostly been low-scoring.

Who will win the match between Helmond Sport vs NAC Breda?

Neither of these two sides are having a slight edge when compared with their recordings at respective patches. Helmond won two of the last four home matches while Breda won two in the previous four road trips.

Since Breda have an upper hand in the h2h tradition, we expect a result in favor of them on Friday.

Almost every on the road fixtures of Breda saw the landing of over 2.5 goals option. This is mainly due to their poor defensive side.

Helmond’s attacking side have scored goals even in the games they lost at home. Therefore, we expect this match to have over 2.5 goals ft despite of their h2h trend of low-scoring matches.

Neither of these two teams are in possession of a decent defensive line. They both have been leaking goals consistently of late too. In that case, we expect this match to have goals from both ends.

To predict a clear winner from these two is a tight call. A draw or a win for NAC Breda at 1.50 odds is our first pick considering the h2h upper hand and current form.

For the second tip, both teams to score at 1.61 odds seems to be the best option to choose considering the weak defenses of both.