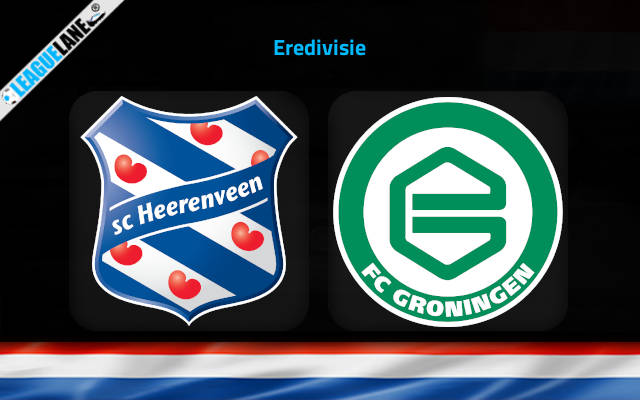 Heerenveen vs Groningen Predictions and Free Tips from our expert tipsters when the teams go head-to-head in Dutch Eredivisie on Sunday, 22 January 2023.

Heerenveen have been consistent throughout the campaign, and particularly after the World Cup break. They are going after an entry into the top-seven of the table, and need a surplus of two points as things stand.

Meanwhile, Groningen are the only team to have a 100% losing record in the league in the last four game weeks, and are struggling to stay above the relegation cut-off.

Heerenveen recorded a 3-1 win in the latest h2h encounter, and they are also unbeaten in the past five years. They also recorded 17 of the previous 21 h2h wins at this ground to their name, and the last they ever lost such a clash was seven years back.

Who will win the match between Heerenveen and Groningen?

Heerenveen have a phenomenal h2h record against this rival, and particularly so at this ground. They are also in great form at the moment, and are at home.

On the other hand, Groningen are on a five-game losing streak, and they have just three wins to their name all through this campaign. And one of these victories even came against the dead-last placed Cambuur.

It appears that hosts Heerenveen are clear favorites this weekend.

Only two teams conceded more goals than Groningen this season in the Eredivisie, and the team let in three goals in the latest h2h encounter. In fact, the last they kept a clean sheet against this rival was five years back.

Chances are very high for goals to come in huge numbers this Sunday.

Heerenveen have one of the best defenses in the entire competition. Only toppers Feyenoord, and Twente have let in fewer goals than them this season. Moreover, Groningen were able to find the back of the net in just one of their games after the break.

As such, it looks as if the guests will have to leave empty-handed this Sunday.

Heerenveen have a dominant h2h record against this foe – and particularly at this stadium, it has been beyond impressive. They are also on a good stretch of performances at the moment, and are going after a top-seven spot.

Meanwhile, Groningen are on a long series of losses, and have been very poor with their performances on the road.

For the reasons, Heerenveen to Win at an odd of 1.75 looks the best bet for the day.

Coming to goals, Groningen are conceding in huge numbers, and they also did so in past h2h clashes. In fact, they let in three or more goals in three of their last four fixtures, and conceded three in their latest h2h meeting.

As such, Over 1.5 Team Goals by Heerenveen at 1.80 odd would be the optimal second bet here.