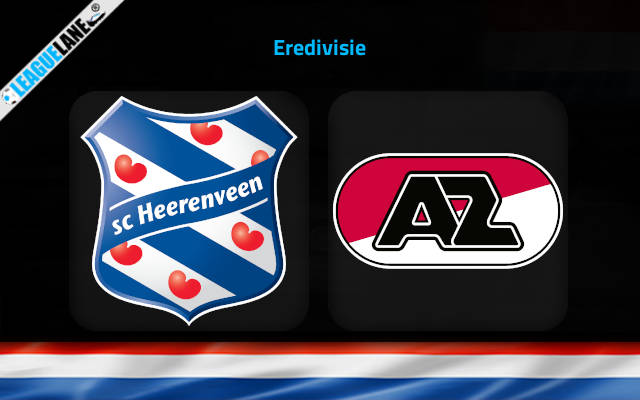 Heerenveen vs AZ Alkmaar Predictions and Free Tips from our expert tipsters when the teams go head-to-head in Eredivisie on Saturday, 14 January 2023.

AZ Alkmaar have been the best team on the road bar none in the Dutch top flight this season. They are placed fifth in the table at the moment, and are going after a top-four spot. It helps their cause that the fourth-placed Twente are pitted against the second-placed Ajax this game week.

Meanwhile, Heerenveen are currently out of the top-seven of the table. They have not been that impressive at home so far this season. In fact, of their total three wins at this venue, one came against the dead-last placed Cambuur.

AZ easily have been the better team in h2h clashes over the years. They recorded a 2-0 win the last time these two locked horns, and managed to win six of the former seven meetings too.

Furthermore, they even won six of the last seven h2h matches at this ground as well.

Who will win the match between Heerenveen and AZ Alkmaar?

Alkmaar need a surplus of just one point to climb level with the second-placed Ajax. And the latter are locking horns with the fourth-placed Twente. For sure AZ are determined to make full use of this opportunity.

Going on, they have a phenomenal h2h record against this rival over the years, and at the same time Heerenveen are not performing at a great level. In fact, they have a 100% losing record at home in league games after September, barring their match-up against the dead-last placed Cambuur.

Both teams appear to be not in fine form with their offense, and it is likely that we might be watching a rather low-scoring affair.

Heerenveen are yet to score a goal since the season resumed, and they also failed to find the back of the net in the latest h2h meeting. The visitors AZ will be determined to make good use of this stat.

And as such, both teams might not possibly score in the fixture.

AZ won six of the past seven overall h2h encounters, and importantly they won six of the previous seven h2h meetings at this ground. Heerenveen are struggling quite a bit lately, and are expected to struggle this Saturday.

Going on, goals are not expected in huge numbers this weekend. The visitors are in all probability going to deliver a narrow and hard-fought win. Likely, a Correct Score bet of 1-0 in favor of AZ at an odd of 8.00 is a good second tip.