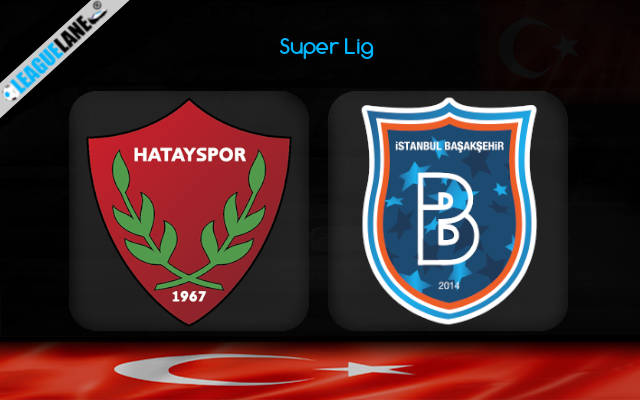 Hatayspor is third on the table in the zone for Europa Conference League qualification. A win in the next schdule fires them at the 2nd spot in the zone for Champions League promotion. Basaksehir is looking to extend their Super Lig unbeaten run to 7 as they travel to Antakya Ataturk Stadyumu this Sunday.

Basaksehir is unbeaten in the last 6 games and resides at the 6th spot with 22 points. They won 7 games while drawing only once. Another 6 games ended in a defeat with goals to conceding ratio in at 20:16.

They won 4 games from the past 5 fixtures scoring 8 in total while conceding 4. Their last match against Altay witnessed a goal less draw. At least one first half goal has been scored in each of Basaksehir’s last 7 away games in a row.

Hatayspor is at the 3rd spot with 26 points from 14 games. They won 8 games while drawing 2. A total of 4 matches ended in a defeat with third most goals to conceding ratio on the table standing at 23:14.

They lost the last game against Sivasspor by 4 goals and seeks to gain momentum in the next fixture. They have failed to prevent opponents from scoring in 5 of their previous 6 matches, leaking 8 goals on the way. A defensive makeover is urgently needed.

Average number of goals in the meeting between the two resulted at 3.5 while both teams didn’t score on their last match.

We feel the home team to have a narrow edge as they have a better defense than the visitors and has an overall remarkable performance at home and away fixtures. Even though the chance for having a draw cannot be neglected.