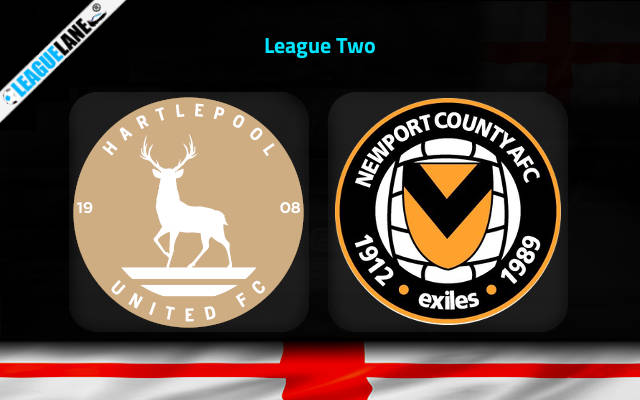 Newport County will enter the match in higher spirits but we must respect Hartlepool’s fantastic home record. Looking also at the head to head stats we can recognize the importance of the home court advantage in this matchup.

Hartlepool United host Newport County in the first and one of the most interesting matches of the Gameweek No 16 in the League Two on Friday evening at Victoria Park.

Five different teams are all square at 23 points after 15 rounds of the competition. They are located between 6th and 10th position in the league standings.

Hartlepool and Newport County are among these five outfits, meaning we have the right to call this tie a six-pointer despite being this early in the season.

Newport County should enter the match in higher spirits following a tremendous performance in the 5-0 drubbing of Stevenage in the previous round.

Their top scorer Dominic Telford completed a hat-trick on the occasion to take his league tally to nine goals this season.

Hartlepool, on the other side, were at the wrong end of a 5-0 thumping in the previous round as they fell 5-0 away at Leyton Orient two weeks ago.

Nevertheless, it is worth mentioning that Hartlepool United generally play incomparably better at home than on the road.

Antony Sweeney’s men won six and drew one of seven home fixtures this season. They held the higher-division Wycombe Wanderers to a 2-2 draw in the last weekend’s FA Cup clash as well at home.