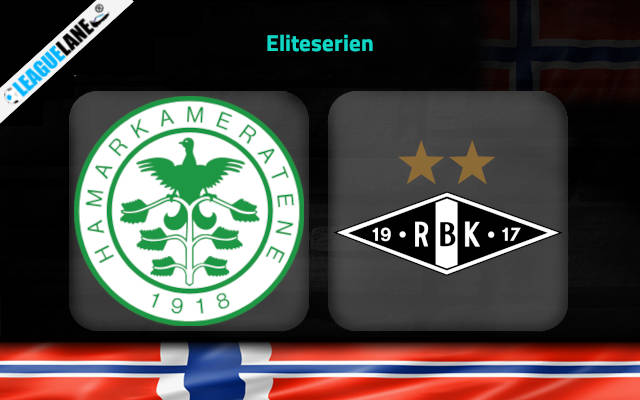 HamKam will aim to keep the ongoing unbeaten streak from breaking in the next match. The team has played moderately well, losing only once in their six matches. In the remaining matches, the team has won in one and drawn in four. Their performance has placed the team in the bottom half of the league table at eleventh position with seven points to their name.

After the last match, HamKam has added yet another draw to their tally. At the moment, the team has drawn consecutively in the last three matches. They played their last match against Valerenga, in which both teams scored one goal, ending the match with 1-1 FT score.

With six matches in the past, Rosenborg has played moderately well in their matches. From the last six matches, the team has got two wins, three draws and one loss. The team currently stands eight on the league table with nine points from their matches.

Rosenborg played their last match against Sandefjord. In the match, Rosenborg scored three goals while Sandefjord could score only one. The match ended with a clean sheet for Rosenborg with 3-0 FT score.

Both HamKam and Rosenborg have played moderately well in their matches. HamKam has scored over 1.5 goals in two of the last five matches while Rosenborg has scored so in only one of the match.

HamKam has played three matches in their home ground and has not lost in any one of them. The team hops to keep their unbeaten from breaking in this match. They have scored over 1.5 goals in two of the home matches as well. Rosenborg has not had a single win in their road trips this season. With three away matches in the past, Rosenborg ended the first two matches in a draw while the last match ended in loss for the team.

Looking at the records, the match will most likely end in a win for HamKam or in a draw. Both teams have contributed to the scoreboard in most of the matches and can be expected to score so in this match as well.