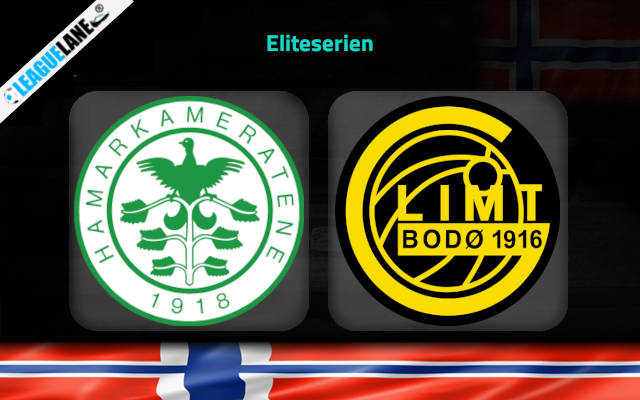 Matchday 14 of Eliteserien is set for this weekend as the mid-side Ham Kam play host to Bodo/Glimt where both these sides differ by 5 points and places each. These two teams will be seen clashing at Briskeby Arena, this Saturday.

Bodo/Glimt is at the 4th spot on the standing with 22 points from 13 games. They won 6 times in the league while having drawn on 4 and have lost on thrice other occasions. They have one of the best offensive side in Eliteserien, netting 28 goals so far.

Under the management of Kjetil Knutsen, the visitors faced KR in the UEFA Champions League qualifier game in midweek, where they lost by 3-1 margin. Goals have been bagged 21 times in the prior 6 matches in which Bodo/Glimt have taken to the field.

On the other side, Ham Kam resides at the 10th position on the table with 17 points. Of the 13 matches played, they won 3 times in the league while having drawn on 8 and have lost on twice other occasions. Following promotion last season, they have been quite impressive so far this year in the Eliteserien.

The home side head into this match coming off the back of a 1-1 drawn game over FK Haugesund. They have failed to prevent opponents from scoring in 5 of their previous 6 games, leaking 7 goals in the process.

The visitors remain unbeaten in their last 10 h2h fixtures and have a decent track record against them. Bodo/Glimt also won half of their games played on road this season so far.

Meanwhile, Ham Kam have not emerged victorious against this rival in their previous 2 league games. They even won just 2 home league matches up to this point.

Both teams have scored in 3 of the last 6 h2h league meetings, and we’re expecting more of the same on Saturday. Despite the relatively impressive performances and results of the hosts, the home side will be firm favorites to win this one.