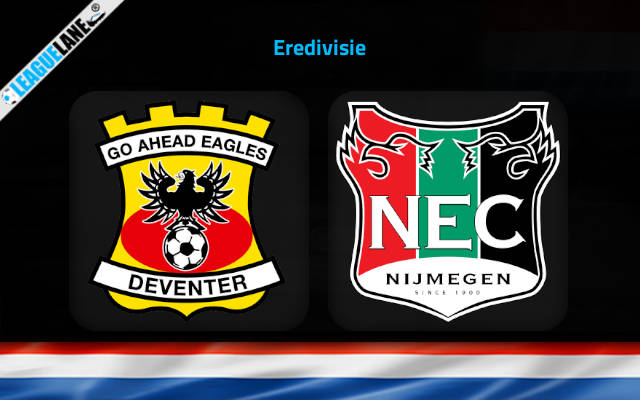 The draw somehow pops up as the most likable of the three outcomes in this clash if we take both outfits’ form into consideration. NEC Nijmegen head into this off the back of three straight defeats, while Go Ahead Eagles looked toothless in the last two league affairs against Twente and Utrecht.

Go Ahead Eagles and NEC joined the topflight of Dutch football together this season. They are now about to lock horns in the 17th round of the competition on Sunday afternoon at De Adeelarshorst.

Neither of the two outfits will enter the match in high spirits. The hosts did manage to save a point form a tough away clash against Utrecht, but they were lucky rather than impressive not to concede on the occasion.

Go Ahead Eagles are going through crisis in terms of their attacking performances these days.

They have only scored two goals in the last five league games. This will be the music to the ears of Rogier Meijer whose men are looking ahead of an easier fixture after playing PSV last weekend.

NEC offered a strong resistance against the new Eredivisie leaders last time out but conceded two late goals in the final ten minutes of the game to lose 1-2 at the end.

It was the third straight defeat for Nijmegen who could take advantage of Go-Ahead Eagles’ attacking woes to arrest such a negative streak here.

Tips for Go Ahead Eagles vs NEC Nijmegen