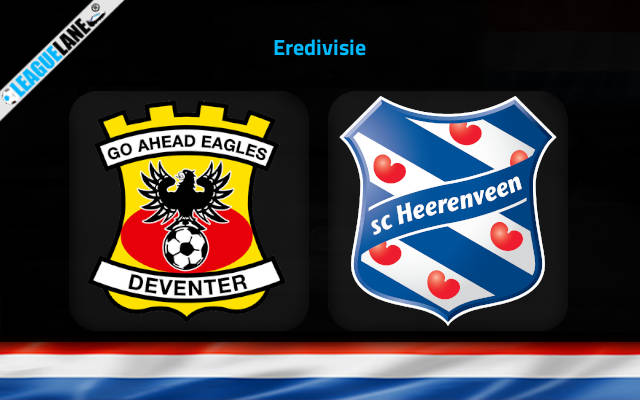 Heerenveen head to De Adelaarshorst stadium to face the hosts Goa Ahead Eagles in an Eredivisie fixture on Saturday.

It took five Eredivisie fixtures for Go Ahead Eagles to seal their maiden victory in this season. Their performance have gone uphill since then. They are following four back-to-back unbeaten games at the moment.

Following a run of unbeaten matches, they have climbed up to the 13th spot in the league standings. They were inside the danger zone before having the above mentioned unbeaten run.

It is worth noting that the Eagles have conceded 16 goals in their 9 league fixtures. This shows that they are having a tough time with their defense.

Meanwhile, Heerenveen won’t want a repeat of their last result here after a 0-1 Eredivisie losing effort against PSV Eindhoven.

While Eagles have improved their form in their last four games, Heerenveen have had a poor run of form in the same course of time.

Matches including Heerenveen have often been seeing goals from their opposition. Their offensive contribution in the same stretch is pretty low.

By the looks of things, it seems that the local supporters might have a pleasant day on Saturday.

Go Ahead Eagles vs Heerenveen Prediction

The Eagles had a poor time at home before improving the form. The only contribution from here is a total of 4 points they got from the last two home games.

Heerenveen recorded the same stat in a negative way on the road. They are currently on a 2-fixture winless streak on the road. Their defensive line had let in a total of 5 goals in the process too.

Taking into account all these observations, anticipate a win for the home side Go Ahead Eagles on Saturday.