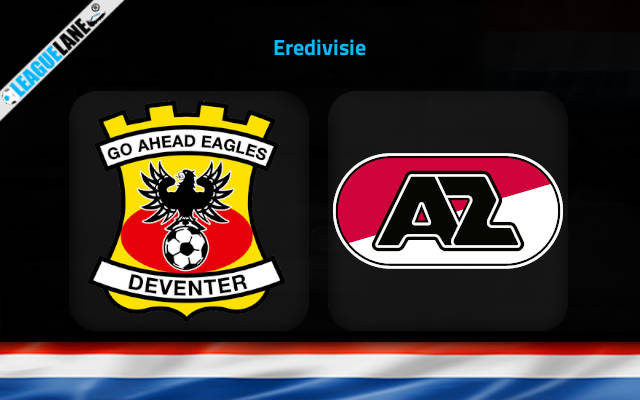 Go Ahead Eagles vs AZ Alkmaar Predictions and Free Tips from our expert tipsters when the teams go head-to-head in Dutch Eredivisie on Wednesday, 25 January 2023.

AZ are in pursuit of the top-most spot, and have been one of the most consistent teams throughout the campaign. And by far they have been the best team on the road.

Meanwhile, the Eagles were able to register just two wins in total at this venue so far, and one of these even came against the relegation-threatened Emmen.

AZ are on a four-fixture winning streak, and they also managed to win six of the past seven clashes. They are unbeaten in the last nine years, and they have a 100% winning record at this ground since 2015.

Who will win the match between Go Ahead Eagles and AZ Alkmaar?

Not only are Alkmaar in great form, but they have a great h2h record against this rival too. They are going after the top-most spot in the league table, and as of now they need a surplus of two points to do that.

In fact, they are on a three-fixture winning streak – scoring nine goals in the process, while counterparts Eagles won just twice at this venue in league fixtures after April of 2022.

Likely, expect the in-form AZ to deliver a winning performance this Wednesday.

Alkmaar scored nine goals from their past three fixtures, and they have not failed to find the back of the net in a league fixture since March of 2022.

Moreover, they slotted in 20 goals from the past seven h2h clashes, and scored twice or more at this venue in h2h encounters at this venue since 2015.

Likely, chances are quite high for goals to come in huge numbers this Wednesday.

The Eagles scored ten goals from their past four appearances at home, and are determined to secure a top-seven finish at any cost. Chances are high that they will be able to find the back of the net at least once.

And as such, goals from either end of the pitch is a real possibility.

Alkmaar have a terrific h2h record against this rival over the years, and even so at this venue. In fact, they have a combined scorecard of 14-2 from the last four games, and currently they are trailing just two points below toppers Feyenoord.

Meanwhile, GA Eagles were able to register just two wins at this stadium this whole season, and one of these came against the 16th placed Emmen.

As such, chances are quite high for AZ Alkmaar to deliver a win this Wednesday. A win for them is placed at an odd of 1.90.

In addition, both teams have shown a real prowess in scoring goals. AZ scored nine goals from their last three games this season, and scored two or more goals in the previous seven h2h encounters in a row.

On top of that, the Eagles scored ten goals from their former four appearances at home.

By the looks of things, the Over 2.5 Match Goals wager at an odd of 1.67 looks very promising.