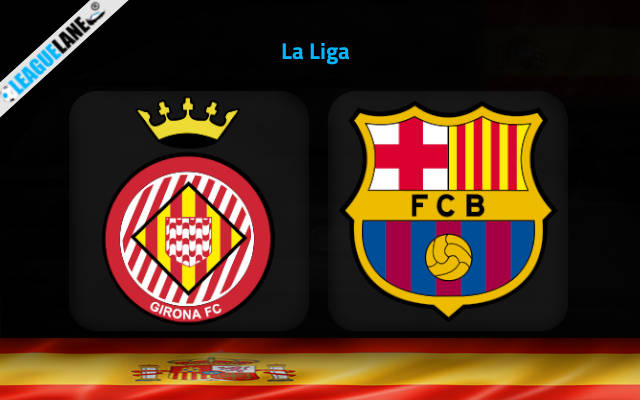 Girona vs Barcelona Predictions and Free Tips from our expert tipsters when the teams go head-to-head in Spanish La Liga on Saturday, 28 January 2023.

The Catalans continue to be the best in the La Liga, and are in firm control of the top-most spot. Defense has been their highlight throughout the campaign, with every other team having let in more than double the number of goals they have conceded so far.

Meanwhile, Girona are stuck in the bottom half of the table, and managed to win just five times all through the campaign. In fact, they recorded a single victory in the league in the past three months.

Barcelona have a 100% winning record against this opponent in the 21st century, barring a single draw. In fact, they scored two or more goals in 100% of meetings so far, and kept clean sheets in all but two of the clashes till now.

Who will win the match between Girona and Barcelona?

Xavi’s men are on course to snatch back the title from the hands of Real Madrid. They are in great form – and dropped just seven points in total all through the campaign.

They also have a phenomenal h2h record against this opponent, and with the second-placed Real Madrid locking horns with the third-placed Sociedad, this is the opportunity for the Catalans to pull ahead.

Girona are inconsistent with their performances, and won just five times in the league till now. By all means they are huge underdogs this weekend.

Only Real Madrid have scored more goals than Barcelona in the La Liga this season, and that too just two more. The Catalans are on a six-game winning streak on the road, and they slotted in 18 goals in the process. Importantly they recorded a 0-5 win in their latest away fixture.

And they also scored two or more goals in all of their h2h meetings in the 21st century.

Chances are quite high for goals to come in huge numbers this Saturday.

Xavi’s men conceded just six goals so far in the league campaign, and three of these came in the El Clasico alone. They are by far the best defense in the whole of Europe at the moment, and they kept clean sheets in all but two of the h2h meetings till now.

Likely, chances are low for Girona to find the back of the net this weekend.

Barca are in great form, and are at the top of the table with a three-point lead. They scored 36 goals from their 17 games so far, and scored 18 from their past six road trips. In addition, they found the back of the net 5 times in their latest away game alone.

They also have a 100% winning record in h2h clashes against this opponent – barring a single draw. They lost just once all through the league campaign, and this sole defeat came against reigning European champions Real Madrid.

Girona meanwhile won just five times in the La Liga till now this season, and only one of these victories came in the last three months. They surely are in for a lot of trouble this Saturday.

As such, a win for Barcelona at an odd of 1.60 looks highly promising.

Going on, they scored two or more goals in 100% of h2h meetings till now, and they also scored the most number of goals in the league – barring Real Madrid. Moreover, their latest road trip ended in a 0-5 win for them, and the likes of Ansu Fati, Ousmane Dembele etc looks very hungry.

Likely, goals are expected in plenty – and the Over 2.5 Match Goals wager would be a good second tip – at an odd of 1.75.