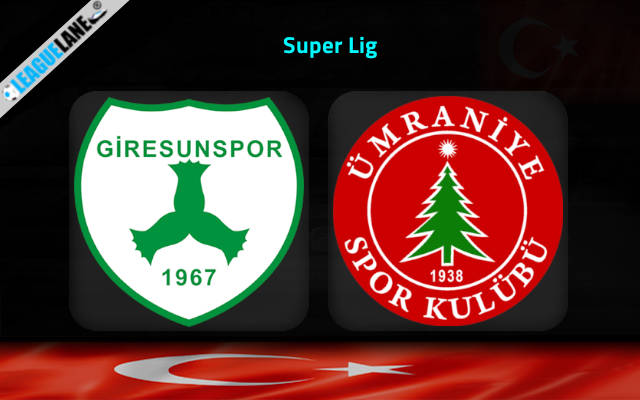 Giresunspor vs Umraniyespor Predictions and Free Tips from our expert tipsters when the teams go head-to-head in Super Lig on Sunday, 08 January 2023.

Looking at the bottom five teams, Umraniyespor have the best form. They are unbeaten in four of their last five outings. They held Hatayspor in a 2-2 draw last time.

On the other hand, Giresunspor picked an important win over Gaziantep last month, which helped them reach eleventh in the league. Now they will focus on the league fixtures as they are out of the Turkish Cup.

The visitors are on a two-game winning streak against this team. The host won this fixture back in 2020, this is their only victory in the last five years.

At Cotanak Stadyumu the visitors have performed well as they are unbeaten in three of the last five outings.

Who will win the match between Giresunspor and Umraniyespor?

Umraniyespor will likely win this fixture, they have dominated this fixture in the last five years. Do also note that both teams have a similar form in the league presently.

Also, it has been nearly three years since the last time the host celebrated a win against this team at Cotanak Stadyumu.

Three of the last four head-to-head matches ended with more than three goals being scored. In the last two years, this fixture has been a high-scoring one.

The visitors have won three of the last four encounters against this team. We can back the visitors to win this fixture. They are unbeaten in four of their last five outings. Therefore, the first tip is that Umraniyespor will win this game – at 3.30 odd.

Our second tip is that Over 2.5 goals will be scored – at 1.85. The most recent meeting ended in a 3-1 scoreline. With just one exception the last four matches ended with a minimum of three goals being scored.