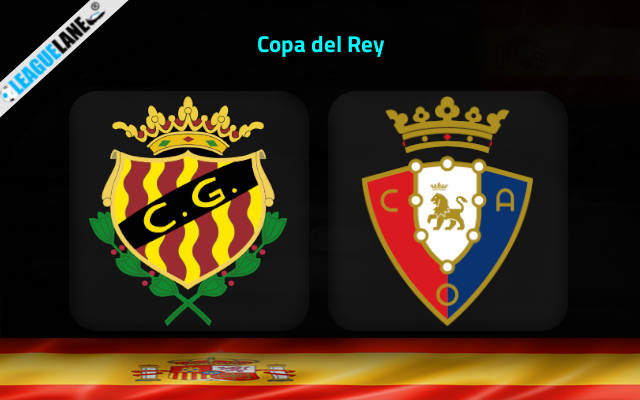 Gimnastic vs Osasuna Predictions and Free Tips from our expert tipsters when the teams go head-to-head in Copa del Rey on Thursday, 5 January 2023.

Gimnastic are a team that currently ply their trade in the third tier of the Spanish football hierarchy, and it really cannot be said that they have been consistent in their performances lately.

Meanwhile, Osasuna have been delivering impressive results in the Spanish top flight, arguably one of the top-two leagues in Europe, and they really are contenders for a top-six finish in the table.

As one would expect Osasuna have been the better team over the course of their h2h clashes over the years. The latest meeting ended in a 1-0 win for them, in the Segunda Division in 2019.

They also managed to record six of the former nine overall wins, and found the back of the net in plenty in the process.

Who will win the match between Gimnastic and Osasuna?

It is a pretty obvious pick for a win here – Osasuna. They are in great form, and regularly take on some of the best teams in the world. They would definitely have set an objective to go deep in the Copa del Rey – which is their one realistic chance to secure a trophy this season.

Gimnastic could post just a single clean sheet from their last seven games, while their counterparts Osasuna scored three or more goals in their last two Copa del Rey fixtures.

Likely, chances are high for goals to come in plenty this Thursday.

The hosts have nothing to lose here. They are the underdogs, and this lifts a lot of pressure off of them. On top of that, they have put forth decent offensive performances at home lately.

They might not win this fixture, but they certainly have a shot to find the back of the net at least once.

Osasuna are from the top flight, and are in much better form. They also have a dominant h2h record over the years. Meanwhile, their opposite number Gimnastic are struggling for consistency at the moment. As such, expect a win for Osasuna this game week.

However, they have faced some defensive struggles lately, and at the same time the hosts Gimnastic have a habit of scoring at home – in spite of the results. Likely, anticipate goals in plenty.