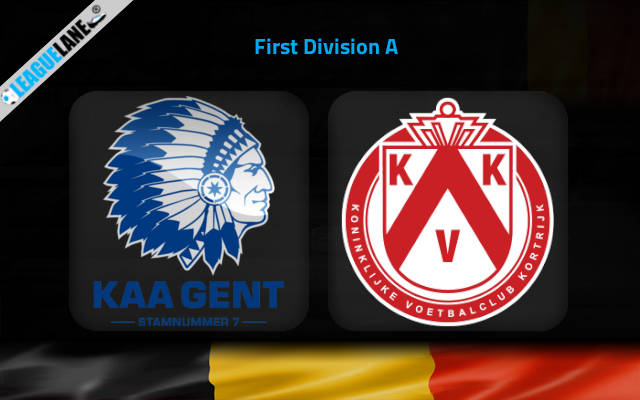 In the zone for Conference League group, Gent is leading them while Kortrijk sealed their final berth.

The hosts are looking forward on a spot for Championship group after a recent league draw.

The visitors have completed their hat-trick victory run in the league and look forward to extend it as they visit Ghelamco Arena this Friday.

Gent is at the 5th spot on the standing with 34 points from 21 games. They won 10 times in the league while drawing on 4 and losing on 7 other occasions. They have scored 33 in total while conceding a sum of 22 so far this season.

De Buffalo’s drew to Royale Union SG on boxing day while they themselves booked a semi final berth of Belgium Cup against Club Brugge after defeating St. Liege in the quarter finals by 3-1. On the opening match of the year, they lost to Alkmaar at a club friendly.

On the other hand, Kortrijk resides at the 8th position on the table with 31points. Of the 20 matches played, they won on 8 games while drawing 7 times and losing on 5 other occasions. Their total goals to conceding ratio stands at 26:22.

De Kerels were kicked out of the Belgium Cup by Anderlecht by 0-3 at the quarter finals but they are triumphing a hat-trick win in the First Division A. Their latest league fixture against Seraing saw a 2-0 win before Christmas.

Over their prior 6 games, Hein Vanhaezebrouck’s Gent have found the back of the net a total of 10 times with an average scoreline of 1.67. They are also unbeaten in their previous 3 league matches at home.

Coming into this fixture, KV Kortrijk haven’t been defeated in their previous 5 away league schedules. They have also won the last 3 h2hs in a row.

We envisage a home win to occur this Friday as Gent are excellent at home winning 7 out of the 10 games played at Ghelamco Arena this season. Also the average performance of visitors at away matches makes it pretty obvious.