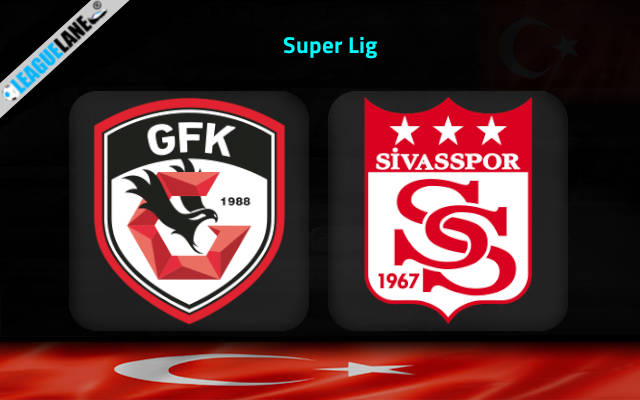 Gaziantep vs Sivasspor Predictions and Free Tips from our expert tipsters when the teams go head-to-head in Turkish Super Lig on Sunday, 22 January 2023.

Gaziantep might be one of the worst teams in the league based on recent form. They are one of the very few squads to have remained winless in the last five league games. Moreover, they have just two Super Lig wins to their name at home – and both came back in August.

This might be the perfect opportunity for Sivasspor to climb over the relegation cut-off. They have massively improved their form after the World Cup break, and as an added bonus, they have a great h2h record against this rival over the years.

Not once have Sivasspor failed to find the back of the net against this opponent in the past decade, and they lost just thrice in h2h meetings in the last nine years.

And coming to goals, nine of the former eleven h2h clashes saw either team finding the back of the net.

Who will win the match between Gaziantep and Sivasspor?

Gaziantep last registered a win in the league three months back, and their latest Super Lig victory at home came in August. It is also quite worrying that their last clean sheet at home came five months back as well.

Meanwhile, Sivasspor remained unbeaten in four of their last six overall fixtures, and found the back of the net twice or more on four separate occasions during this stretch.

They have significantly improved their form after the season resumed – couple that with their dominant h2h record against Gaziantep, and we expect Sivasspor to register the win this Sunday.

Majority of h2h meetings between the two teams had goals in huge numbers. On top of that neither team has kept a clean sheet recently in league fixtures.

It appears that we are in line for a goal-fest this weekend.

Not once have Gaziantep kept a clean sheet in the past decade in h2h meetings, while Sivasspor have a single clean sheet on the road in league games going back to March of 2022.

Bring the previous h2h scorecards into this mix, and we anticipate that either team will find the back of the net this Sunday.

Sivasspor have been a much better team after the break, and are determined to climb higher in the table. It helps their cause that the three teams just above them – all are pitted against toppers of the league this game week.

This is a great opportunity for the squad to put some safety cushion of points over the relegation cut-off.

On top of that Gaziantep are on a very long stretch of winless performances – and particularly so at home. Along with that consider their poor h2h record as well, and we expect Sivsasspor to have a definitive edge this weekend. A win on them is placed at 2.60 odd.

Coming to goals, most of the past h2h clashes had goals in huge numbers. In fact, not once have Gaziantep kept a clean sheet in a h2h meeting in the last ten years, while their counterparts for the day managed one clean sheet on the road in the past ten months.

As things stand, the Both Teams to Score wager placed at an odd of 1.75 appears very promising.