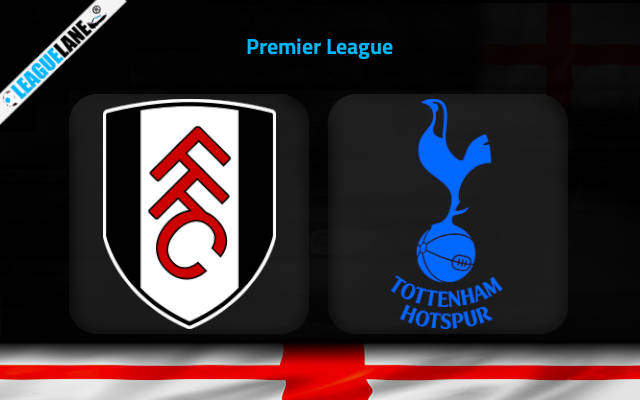 Fulham vs Tottenham Predictions and Free Tips from our expert tipsters when the teams go head-to-head in English Premier League on Monday, 23 January 2023.

Spurs will be cursing themselves after they missed a golden opportunity to defeat Manchester City the last match-day. Anyhow they will try again this Monday, as they keep on trying to climb into one of the podium spots.

Meanwhile, Fulham have been really impressive this season in the English top flight. They are placed sixth in the table, and are one of the four teams in the competition to have won four of the past five league games.

Spurs have a phenomenal h2h record against this rival over the years. In fact, they won 13 of the past 16 meetings, and are on an impressive six-fixture winning streak at this ground.

It is also to be noted that six of the former eight encounters between the two had goals from either side of the pitch.

Who will win the match between Fulham and Tottenham?

Both teams are in great form at the moment, but the Spurs have the edge surely. They are much more experienced in crunch situations, and have been one of the best teams in the league for quite some time now.

On the other hand, Fulham were plying their trade in the second division the last year, and most importantly they have a worrying h2h record against this opponent.

Both teams might be performing at a high level at the moment – but do note that their respective defenses have not been up to the mark. In fact, Spurs let in four goals in just the second half of their latest fixture, and have a single clean sheet in a league fixture since mid-October.

Meanwhile, Fulham have just two clean sheets at home this whole season, and importantly they conceded goals in plenty in past h2h clashes.

Likely, chances are high for goals to come in plenty this Monday.

Spurs are rightfully considered the favorites for the game week – but their defense is really causing worry for their fans. They conceded six goals from their past two games alone, and let in two or more goals in ten of their former eleven league fixtures.

And seldom have they kept clean sheets even in h2h clashes.

As such, anticipate goals to come from either end of the pitch this Monday.

Tottenham won 13 of the past 16 h2h clashes, and have been one of the titans of the league for the past several years. On the other hand, Fulham were promoted to the top flight just at the end of the last season.

Their inexperience and poor h2h record are expected to cost them this Monday, against the Spurs who are determined to go for a top-four finish.

As such, Tottenham to Win at an odd of 2.20 would be a great pick here.

Coming to goals, most of the past h2h clashes had goals in huge numbers. Six of the past eight meetings between the two had goals from both teams, while seven of the former eight at this stadium had three or more goals.

It appears that we are in line for a goal-fest this Monday. The Over 2.5 Match Goals wager is placed at an odd of 1.80.