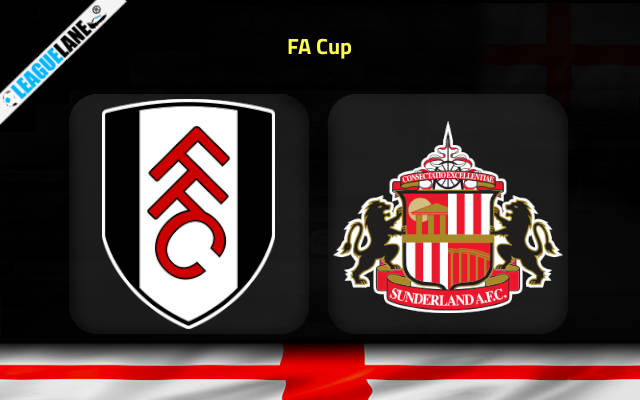 Fulham vs Sunderland Predictions and Free Tips from our expert tipsters when the teams go head-to-head in English FA Cup on Saturday, 28 January 2023.

Despite the Premier League being insanely competitive this season, Fulham have managed to hold on to a top-seven spot. They lost just thrice at home since May of 2022 in all competitions, and these three defeats came against teams currently in the top-five of the table.

Meanwhile, Sunderland have been on an inconsistent run throughout the campaign, and importantly they are stuck in the mid table of the Championship.

Fulham recorded a 2-1 win in the latest encounter between the two teams, and are also unbeaten in the past six years. And in the last 15 years, the guests have managed to win just thrice at this ground.

Do also note that every single clash at this stadium in the last ten years had goals from either side of the pitch.

Who will win the match between Fulham and Sunderland?

Fulham are currently one of the teams that are in contention for a European spot from the English top flight, and they are at home.

On the other hand, Sunderland are trying their best to hold on to a mid-table spot in the second tier, and have been inconsistent throughout the campaign.

Likely, expect a win for Fulham this weekend at their home.

Both teams are delivering great offensive performances regardless of the results, and as such, chances are high for goals to come in plenty this Saturday.

100% of h2h meetings at this stadium in the last ten years had goals from both teams. Moreover, Fulham failed to find the back of the net just twice at this ground since April of 2022, while Sunderland failed to do so on the road just thrice in the same period.

By the looks of things, chances are quite high for goals to come from either end of the pitch.

Fulham have a superior h2h record in the last few years, and they are also one of the top-rated teams in the toughest league in Europe. They are at home, and are taking on an opponent from the second tier.

Opponents Sunderland have struggled to consistently deliver good performances, and they managed to post just four wins on the road in the last four months. Moreover, they were a team that were promoted to the Championship just at the end of the last season.

As things stand, a -1.5 Asian Handicap on Fulham at an odd of 2.25 looks very promising.

Going on, both teams have put up good goal-scoring numbers throughout the season, and the h2h clashes at this stadium in the last ten years have the same story to share as well.

Moreover, the hosts have just two clean sheets at this venue this whole season, while Sunderland have just three to their name on the road in the past eight months.