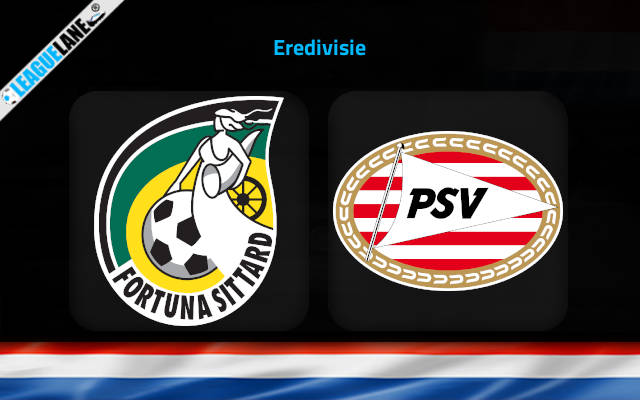 Fortuna Sittard vs PSV Eindhoven Predictions and Free Tips from our expert tipsters when the teams go head-to-head in the Dutch Eredivisie on Sunday, 15 January 2023.

Fortuna Sittard have been delivering inconsistent performances since the beginning of this season. They concedes a defeat at a frequent rate and as a result, they sits outside top half in the league standings.

Sittard will have a tough task on Sunday as they faces an in-form PSV Eindhoven. PSV is currently sitting at the 3rd spot, inside the safe zone and will be hoping to decrease their gap with the top position.

PSV Eindhoven have been the dominant force in the history of this match-up. They are on a 10-game winning streak against Sittard at present.

At this venue, PSV have a 100% winning record against Sittard in the past two decades. Seven of their last eight clashes here saw goals over 2.5 ft.

Who will win the match between Fortuna Sittard vs PSV Eindhoven?

Fortuna Sittard head into this match following a three-game winless streak at home. They lost the past two home matches without scoring a goal.

On the other side, PSV is on a four-game winning streak on the road. This includes fixtures from competitions like Europa League and KNVB.

Moreover, PSV have an exceptional head to head form against Sittard. Therefore, expect a win for them on Sunday.

The past five away matches of PSV had goals over 2.5. Although Sittard have a very few encounters with over 2.5 goals at home lately, their h2h tradition with PSV is different.

Since we expect a result in favour of PSV Eindhoven, we are anticipating a high-scoring match at Fortuna Sittard Stadion.

Sittard failed to score in the last three home matches in a row. Such a poor attacking display will count much against this PSV outfits, who owns a decent defensive side. For the above reasons, we don’t expect a both teams scoring scenario here.

PSV Eindhoven rather have a superior head to head form against Fortuna Sittard for the past two decades. They have scored a total of 9 goals in the last three h2h matches against Sittard at this stadium.

We therefore like to place a 0-3 score-line in favor of PSV as the main bet here. For the second tip, we choose the both teams to score: no option considering the weak attacking stats of Sittard.