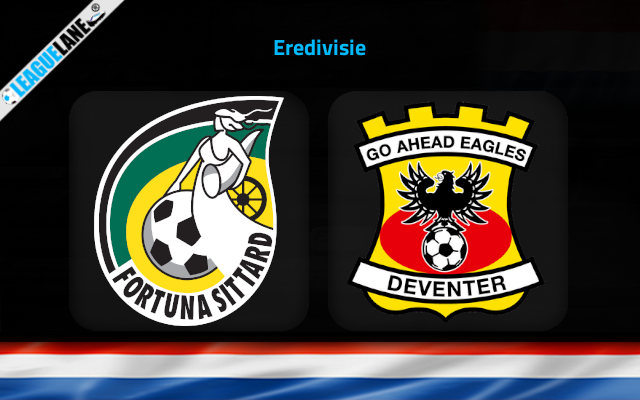 Fortuna Sittard vs Go Ahead Eagles Predictions and Free Tips from our expert tipsters when the teams go head-to-head in the Dutch Eredivisie on Saturday, 07 January 2022.

Fortuna Sittard’s recent recordings looks so inconsistent. They have won only once in the last five league outings. A total of two defeats were conceded by the team during the same course.

They will have a tough ask on Saturday as they face an equally stronger Go Ahead Eagles as their rivals. Eagles are at 11th position in the league standings, one spot above Sittard.

Sittard won four of the last five head to head encounters against Eagles. The latest encounter had finished in a 1-0 win for Sittard.

At this venue, Sittard is on a three-game winning streak against Eagles. Two of the last three clashes here has goals over 2.5 ft.

Who will win the match between Fortuna Sittard vs Go Ahead Eagles?

Sittard have managed to remain unbeaten in three of the last four home matches while Eagles failed to seal a win in the last three road trips. It is worth noting that all those three on the road matches of Eagles had ended in a draw.

Although Sittard have a slight edge over their counterparts, we don’t want to back them as a clear winner here. In addition, Sittard is on a two-game winless streak at home.

However, we expect a result in favor of Fortuna Sittard but we can’t rule out the chances of a draw here.

We expect this match to have over 2.5 goals ft because neither of these two sides are in possession of a decent defensive side. They both are capable of scoring here too.

As we have mentioned earlier, they both are capable of scoring here. Eagles, whom we consider to claim a draw maximum, have scored in all their previous four road trips. In that case, expect a both teams scoring scenario on Saturday at Fortuna Sittard Stadion.

The chances of a draw with Sittard’s good h2h form inclines us to back the Draw no bet: Fortuna Sittard at 1.83 odds. For the second tip, both teams to score at 1.61 odds seems to be ideal enough.