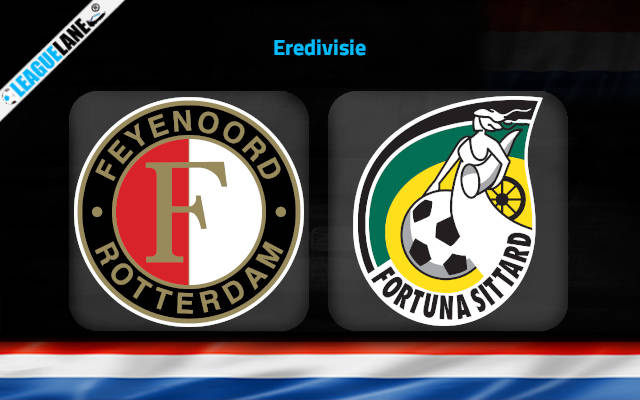 From 4 back to back losses, Sittard lies in the red zone at the second last spot of the table. The home team sits at the spot of Champions League qualification having not lost in the last 10 matches hopes to do the same as they welcome the Fortuna’s to their home ground at De Kuip this Sunday.

The home team sits at the 2nd spot with 32 points in hand. Of the 14 matches played, they had 10 wins and the number of losses and draws share 2 each. They have a solid defense with 2nd in the league having conceded only 14 goals with netting a total of 33.

Feyenoord are unbeaten in the last 7 Eredivisie games with winning 71% of the games this season. There have been 3 or more goals scored in each of their last 5 games with the latest victory was against Heracles by 2-1. They scored 11 goals in total while conceding only 4 from the past 6 matches.

The visitors is at the rock bottom at the second last position of 17 with having only 9 points from 13 games. They won only 2 games while drawing 3. A total of 8 games ended in a defeat with the lowest goals to conceding ratio on the table in at 15:32.

Fortuna has scored against in 5 of their last 6 games, conceding 16 goals overall. Defensively, they have been far from perfect losing 4 back to back games against Groningen, Heracles, PSV and Go Ahead Eagles.

The hosts haven’t been beaten in the league by the Sittard’s in their previous 3 matches and are unbeaten in their last 8 home games this season.

We predict a home win this Sunday as the visitors have a pathetic away run and is at the rock bottom on the table. The match against the second positioned team will result in nothing more than a defeat.