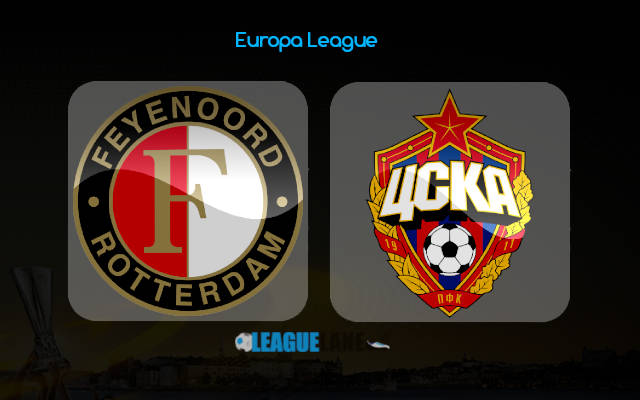 Dick Advocaat was furious with the referees last week after the match against Austrian Wolfsberger.

Feyenoord have lost that match at home 1-4, but visitors were given three penalties by Montenegrin referee, and all of them were questionable. That loss might have a massive impact on Feyenoord’s chances to reach Europa League playoffs this season.

They will have to step up and beat CSKA Moscow this Thursday in Rotterdam to catch up.

Judging by the odds, we are going to have one narrow contest as prices both for home and away victories are at very similar rate.

These two teams have met only once in the past, twelve years ago in UEFA Cup. CSKA Moscow were more successful, winning the match at this stadium 3-1 FT.

Dutch side is having awful record when it comes to clashes against Russian teams in European competitions – five losses, two draws and only two victories.

Interestingly, CSKA Moscow are having no success against Dutch teams too, losing four out of eight encounters while winning only two.

Feyenoord have been unable to parry Ajax, PSV and AZ Alkmaar in the last couple of years, usually falling out of the championship race in very early stages of Eredivisie. Thing they lack is consistency and ability to win points when playing away from home.

At the moment they are 5th on the domestic scene after gathering 15 points from seven games. They are still undefeated in this brand new season, but had three draws already.

We were quite surprised to see him stay in Rotterdam for another year after getting so many lucrative offers from Italy and England.

CSKA Moscow are doing great in Russian Premier League. They are the table leaders after 13 matches with 28 points. Fans are still waiting for the first Europa League win though, as initial two duels against Wolfsberger and Dinamo Zagreb ended without a winner.

We see huge value in backing Russian side for this match. Feyenoord have kept only one clean sheet in the last seven Eredivisie duels.