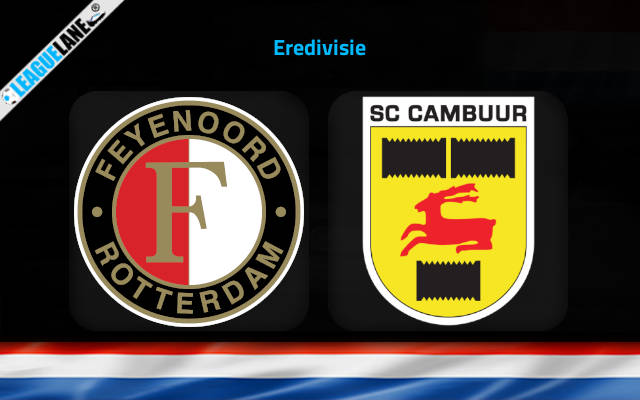 Feyenoord are one of the top-rated teams in the Dutch top flight this season, and are in possession of the third spot in the table. Meanwhile, Cambuur are one of the worst, and they are placed second to last in the standings.

They have just two wins to their name all through the campaign, and they are on a long losing streak at the moment. They scored the least number of goals of all the teams in the tournament – in fact, they are the only squad yet to score ten goals in the whole league.

Meanwhile, not only are Feyenoord the only team in the Eredivisie to have remained unbeaten in the last five match-days, but only one other team let in fewer goals than them in the tournament.

Moreover, they have a superb h2h record against this rival over the years, and particularly so at this venue.

By the looks of things, expect a win for Feyenoord this Thursday at the De Kuip.

Only thrice did Feyenoord lose all through this season. Two defeats came in European games, while the third loss came against toppers PSV.

They are also one of the three teams to still maintain an unbeaten record at home, and they conceded the least number of goals of all the teams in home games – just one.

On the other hand, Cambuur are one of the only two teams in the league to lose the past three games in a row, and they have a 100% winless record away from home, barring a single victory.

Finally, they also have a dominant h2h record against this rival over the years.

By the looks of things, expect a win for Feyenoord this Thursday.

Tips for Feyenoord vs Cambuur