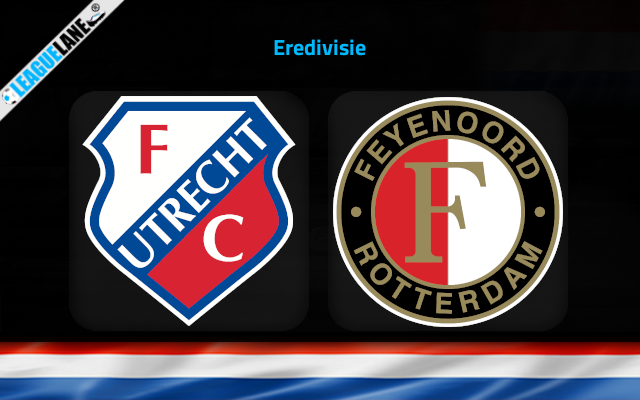 FC Utrecht vs Feyenoord Predictions and Free Tips from our expert tipsters when the teams go head-to-head in the Dutch Eredivisie on Sunday, 08 January 2022.

FC Utrecht’s impressive performances in the last few rounds of Eredivisie have helped them to climb into on of those safe zone spots in the standings. They are currently at 7th spot and have bagged 12 points from the last five matches.

However, they won’t be having an easy test on Sunday as they faces Feyenoord, who is in possession of top spot in the standings.

Feyenoord won three of the last four encounters against FC Utrecht. The latest meeting had finished in a 2-1 win for Feyenoord.

At this venue, the past four overall wins were evenly split, with two each for either sides. Both teams to score option landed in the last seven clashes at this stadium.

Who will win the match between FC Utrecht vs Feyenoord?

Feyenoord have been delivering impressive displays consistently and we can’t resist us from expecting a win for them. They are on a three-fixture unbeaten streak on the road too.

Meanwhile, FC Utrecht were winless in two of the last four home matches. Knowing that Feyenoord have a decent h2h form against Utrecht, we expect an away win on Sunday at Stadion Galgenwaard.

These two teams have been slotting in goals at a fashionable rate lately. A combined total of 16 goals were scored by these two over the course of the last three league matches.

On top of that their recent h2h recordings suggests a high-scoring scenario. Therefore, expect this match to have over 2.5 goals ft.

The firepower of both teams have been delivering an impressive display consistently of late. Splitting their combined total, we can see a tally of 8 coming from either side. Thus, expecting a both teams scoring scenario is quite logical here.

We are inclined to think that Feyenoord could be able to score a couple or more to keep their lead till 90. Backing them at 1.85 odds will be our first bet while for the second tip, we like to place the both teams to score option at 1.57 odds.