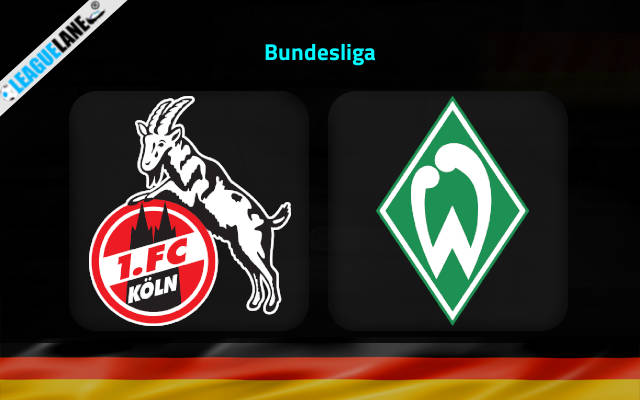 FC Koln vs Werder Bremen Predictions and Free Tips from our expert tipsters when the teams go head-to-head in German Bundesliga on Saturday, 21 January 2023.

Koln are one of the only three teams in the whole league to have remained winless in the last five match-days. They currently have a surplus of just three points over the relegation cut-off, and the last they won at home was three months back.

Meanwhile, Werder Bremen are going after a spot in the top-six of the table. As of now they need a surplus of four points to climb level with the sixth-placed Dortmund.

Werder Bremen are on an unbeaten run against this opponent, that spans four years. They even have a 6-1 win to their credit just two years back, and note that they lost just four times at this venue in h2h clashes – in the past 25 years.

Who will win the match between FC Koln and Werder Bremen?

Werder Bremen lost just twice on the road this whole season, and one of these defeats came against Bayern Munich. Meanwhile, Koln are on a three-fixture losing streak, and conceded two or more goals in their last four games.

They have been struggling to find form all through this campaign. In fact, it has been three months since they last registered a win at this stadium.

On top of that, Werder have a superb h2h record against this opponent in the last four years too.

All in all, it stands to reason that Bremen have the edge this weekend, and are the favorites to register the win.

The last three h2h clashes in a row had goals from both teams. And Bremen might be the favorites for the game week, but the last they kept a clean sheet against this opponent was six years back.

Going on, Werder last kept a clean sheet on the road this season back in September, and they conceded 11 goals from their last three road trips.

And it goes without saying just how weak of a backline Koln have at the moment. In fact, since February of 2022, they have a single clean sheet at this ground.

Continuing from before, both teams are struggling with their respective defenses, and have let in goals in plenty throughout the campaign. The same has been the case in past h2h clashes too.

Likely, chances are high for goals to come from either end of the pitch this weekend.

Bremen might have failed to win their last two league games – but note that those were against Bayern Munich, and Leipzig. In fact, the team has made it a habit to perform well against teams placed in the bottom-most tier, and Koln are absolutely one such team.

Moreover, Werder have a great h2h record against this rival in the past four years, and are surely expected to have the upper hand this Saturday. As such, Werder Bremen to Win at an odd of 3.00 is the best tip for the game week.

Going on, both teams have had their issues with defense. Koln conceded two or more goals in their last four fixtures on the trot, and they have a single clean sheet at home in the past 11 months.

Meanwhile, the guests let in 11 goals in total from just the past three road trips, and they also conceded goals quite in plenty in past h2h clashes.

It appears that a combo of Over 2.5 Match Goals and Both Teams to Score wagers is very promising at an odd of 1.80